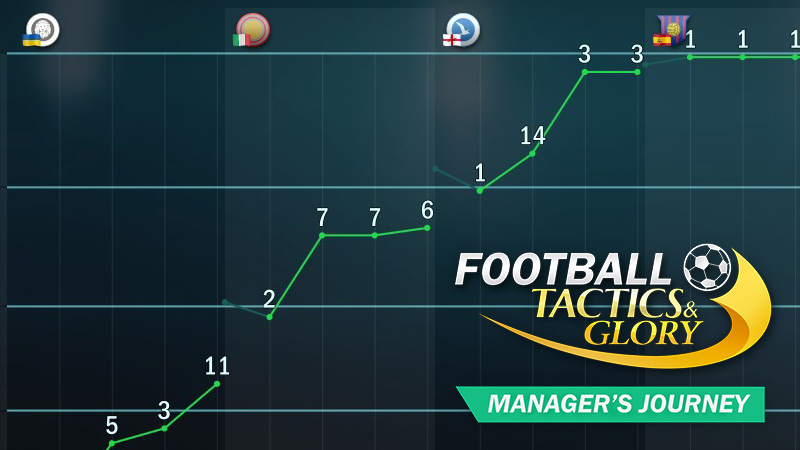 In the next expansion, all leagues will be simulated in all countries of the continent – from Amateur to Premier (previously only the highest league was simulated in other countries).

Combined with the possibility to move to other clubs, there is a chance for the emergence of more interesting personal stories that only happen to you.

Today I want to tell you about one of the interesting stories that happened in my last test campaign.

As the coach of Brighton, I led the club to the Premier League, and after the next season, I was even able to qualify for the European Cup.

Looking through the results of the qualifying matches, I saw that unknown to me Sogndal knocked Barcelona out of the tournament. 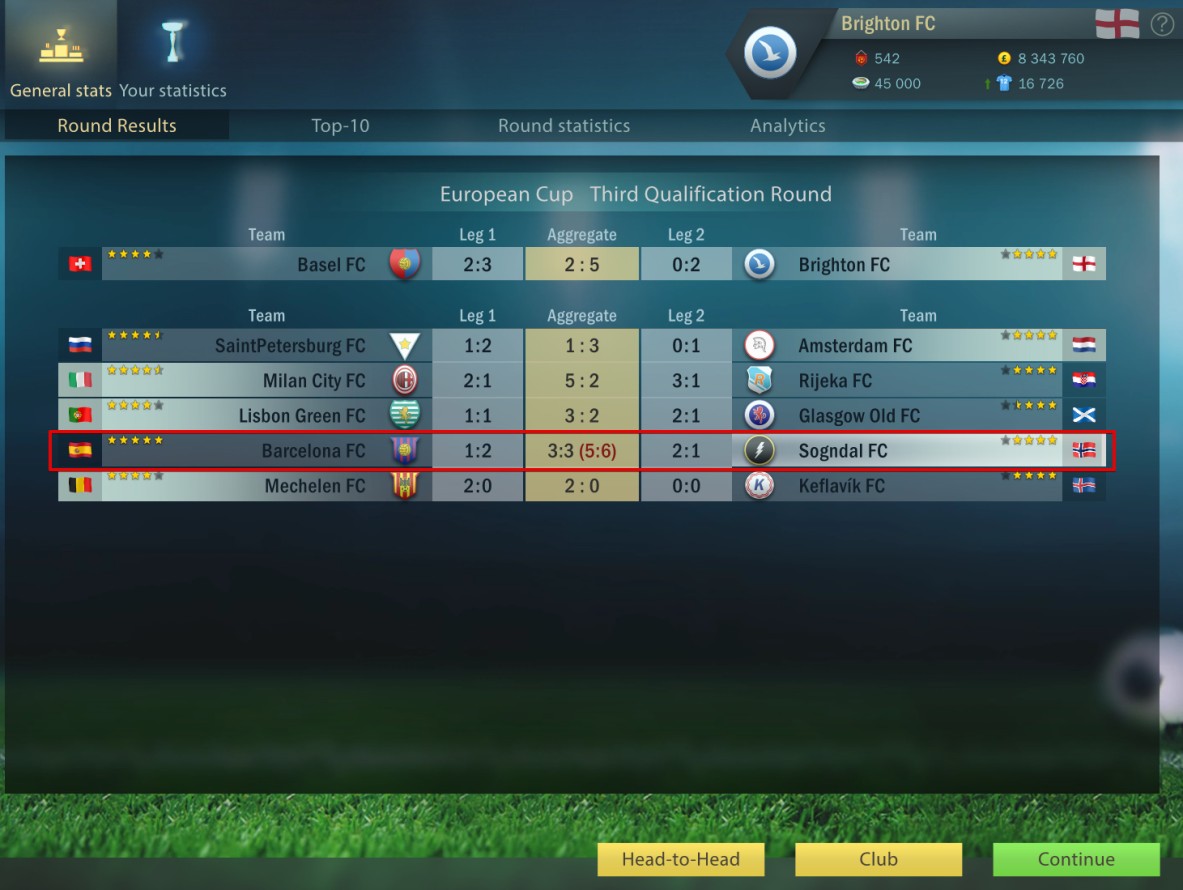 I was surprised and decided to see what kind of club it was.

It turned out that the result was not accidental. Sogndal began to actively develop and from an outsider turned into one of the top clubs in the Norwegian Premier League: 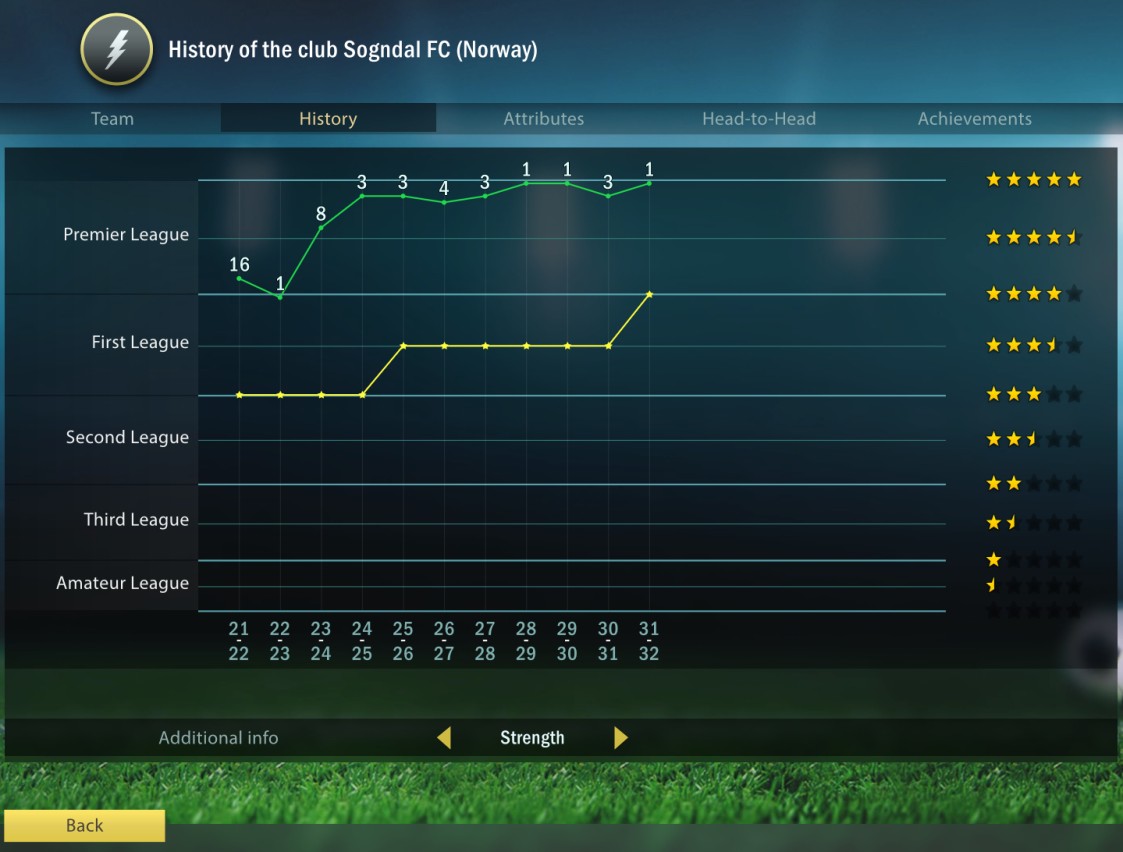 I really enjoyed my 4 years in Brighton. The management never put pressure on me. It was enough for them that I did not get kicked out of the Premier League. Instead, I took third place twice and even won the European Cup.

Naturally, I was noticed by more famous clubs. I received an invitation to lead Barcelona. The club’s management was very ambitious. They wanted me to win European Cup as they saw I already have won it with another club.

Despite the fact that most AI clubs are not very well managed, to my surprise Barcelona was staffed with great footballers. I immediately started winning all the matches of the Spanish Premier League. To understand the strength of my club, here are the league standings, in which I was 7 points ahead of Madrid before the end of the first round (Madrid, btw, was very powerful as well): 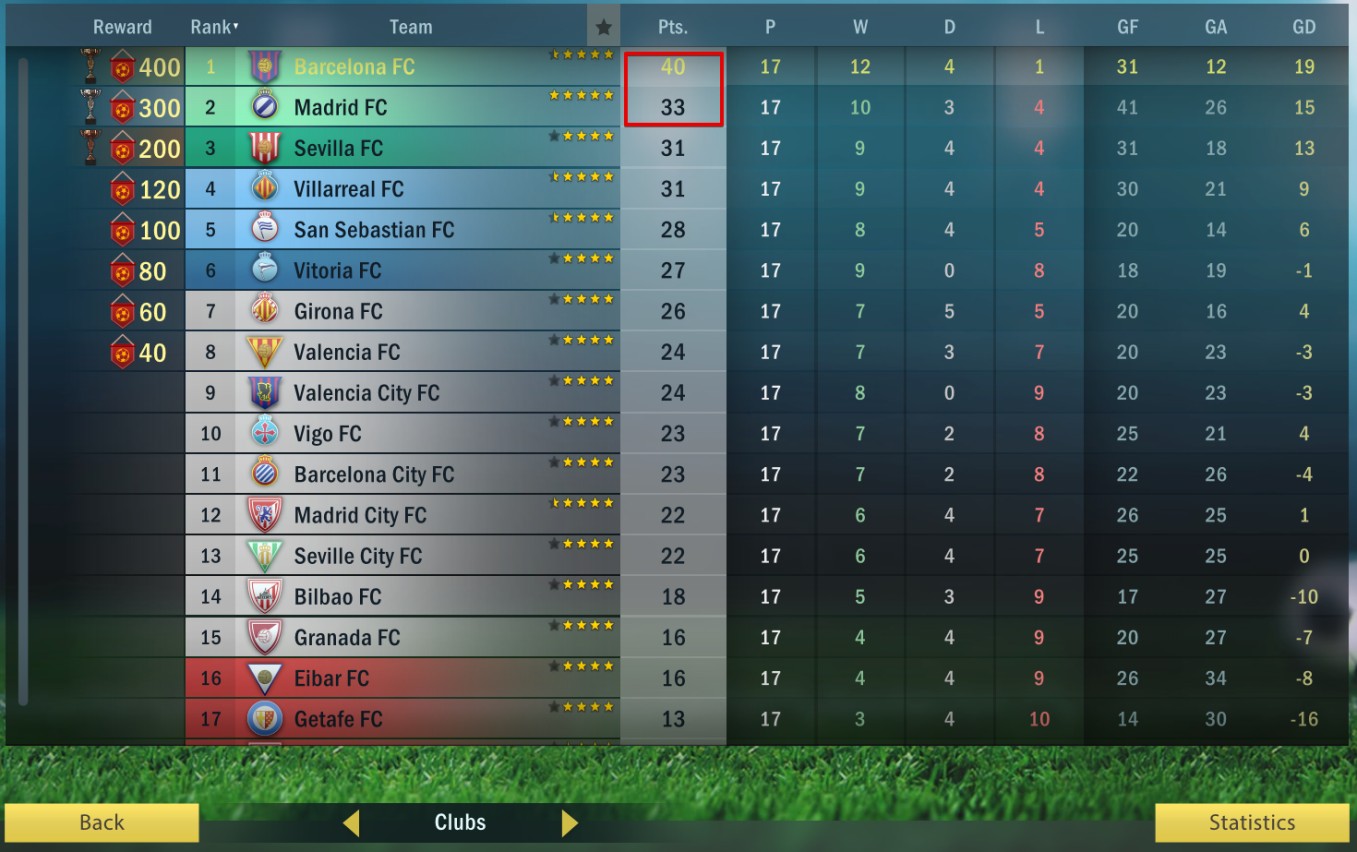 The irony of fate was that in the same season in the European Cup group stage, one of the rivals was Sogndal. It is a significantly weaker club than most Spanish clubs. Not even compared to me. Therefore, I didn’t have a doubt that I will play better than AI in the previous season. 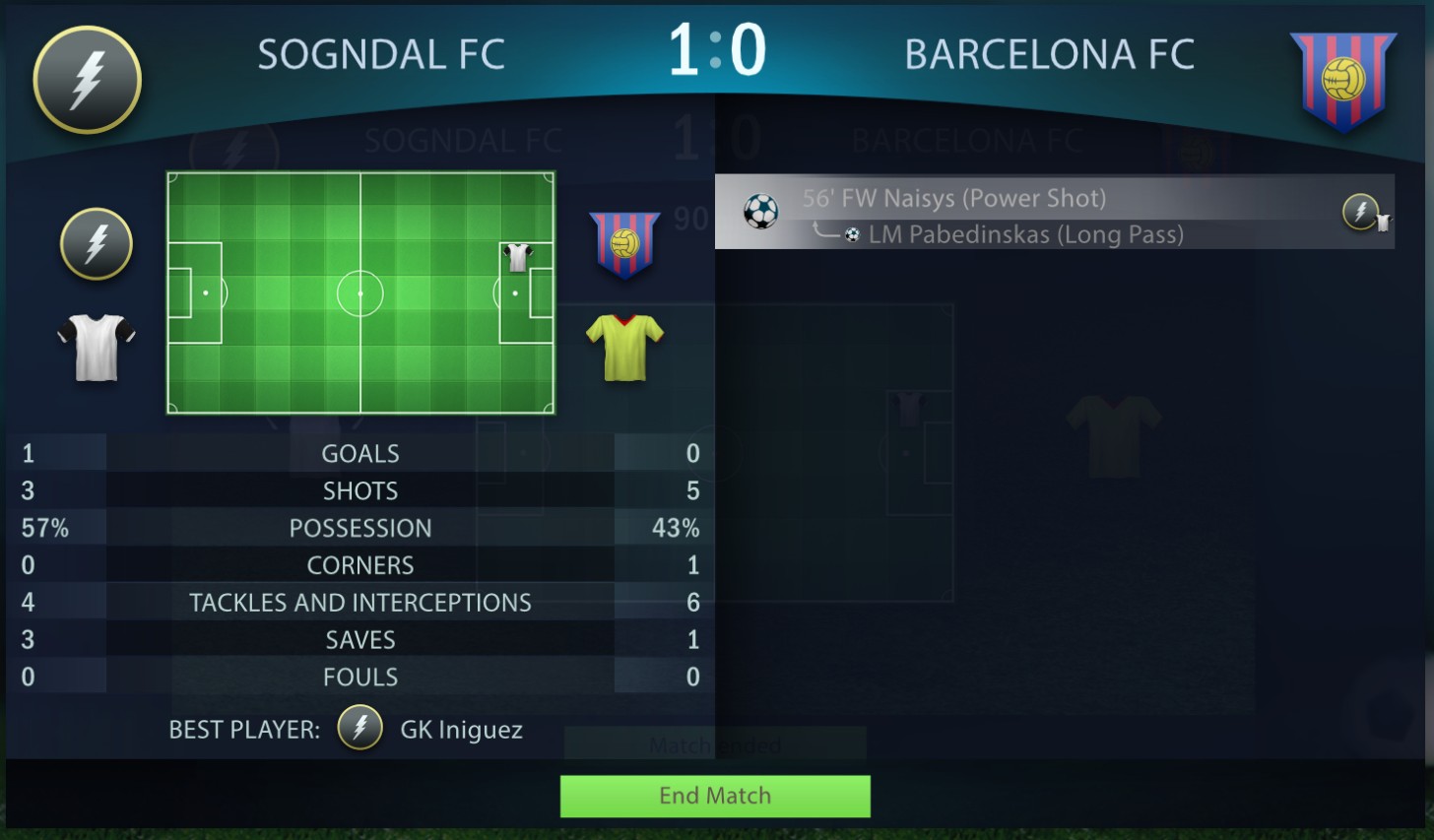 Their goalkeeper became the player of the match, making 3 great saves.

Naturally, I decided that I would not let some upstart stand in my way.

To be frank, I also recalled how in 1997 the real Barcelona wanted to take revenge on Dynamo Kyiv in a similar way for the defeat in a home match. But they did not succeed, Dynamo won the second match with an even more devastating score. These were the times when the star of Andriy Shevchenko shone on the football horizon.

But Sogndal did not have such a star footballer. Therefore, I was able to please my fans with a scoring extravaganza:

A little more about this career

Sogndal finished second in the group that season. This was the last time a Norwegian club had such success in continental tournaments:

Well, here’s a graph showing the history of my coaching career: 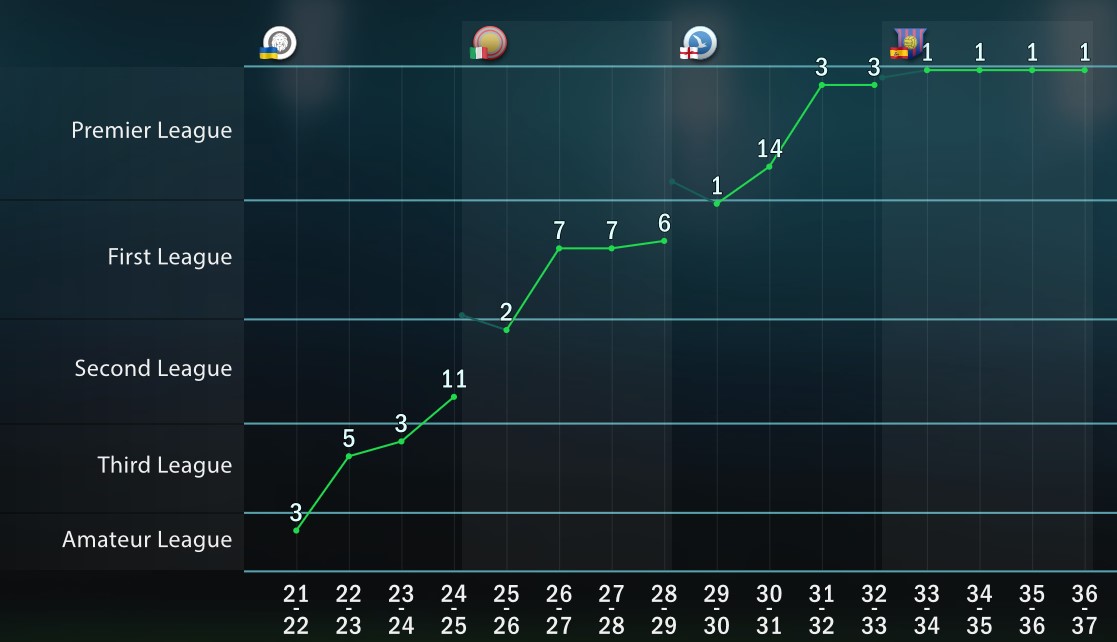 I started the game in Ukraine. After a successful career in the lower leagues, I was invited to a good Italian club, Cremona. There we played quite well in the First League for several seasons. I have earned enough reputation to be invited by a club from England.

Despite the fact that Brighton was quite strong, the management just wanted me to play well in the First League. But my ambitions were much higher, and I brought the club up. And after the victory in the European Cup, I’ve got an invitation from Barcelona.

In my first season in Barcelona, ​​I failed the task: I could not win the European Cup. But since the season as a whole was not a failure (victory in the league and second place in the cup), I managed to persuade the management to give me another chance. We signed a 3-year contract whereby I have to win any 2 trophies every year.

It’s a coincidence, but I spent 4 seasons in each club. 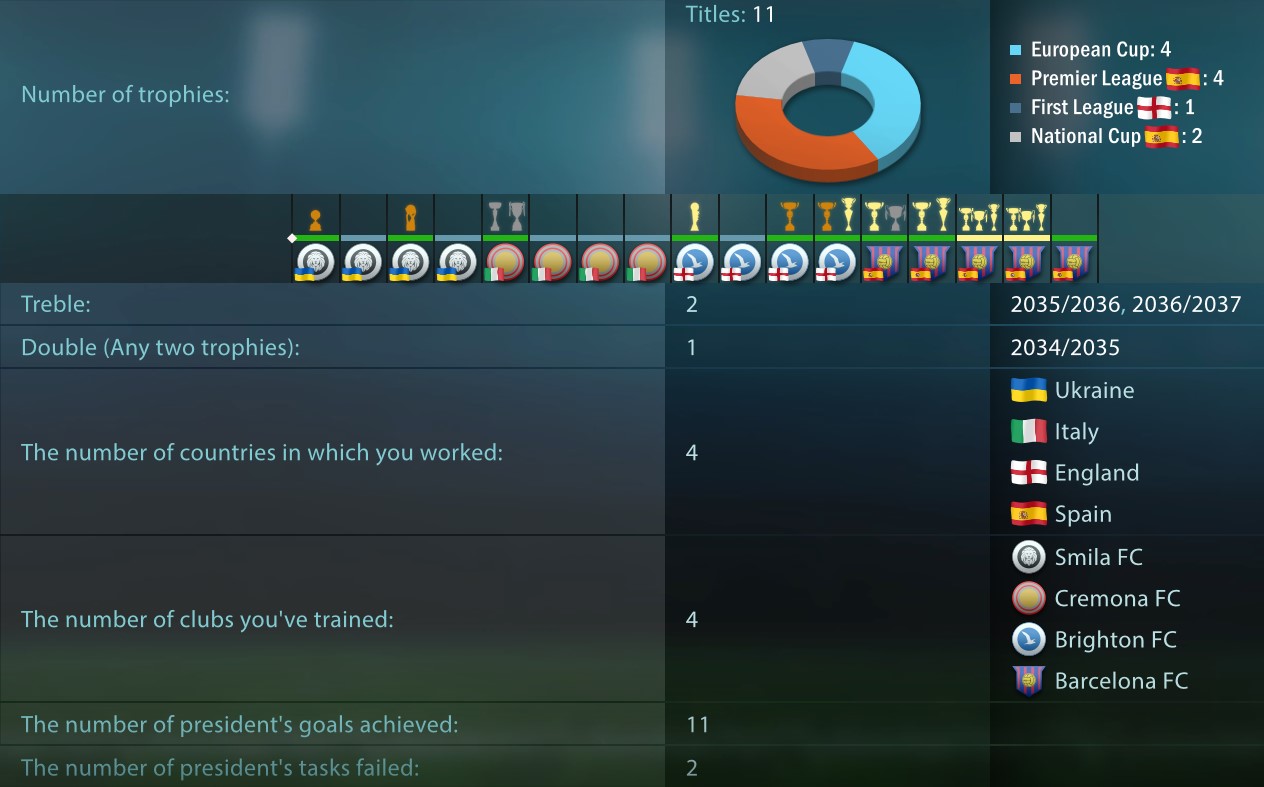 Other stories from Manager’s Journey

I sometimes write notes from my stories on our Discord server: https://discord.gg/HkT8FC7sr4

Also, in the channel #🏗 Beta 👔 Manager’s Journey Stories one of the players who’ve got access to the beta version of the game, writes his own coach story. It might be interesting to read because he describes the game from the player’s perspective: how it’s played, what is the interface etc. So it’s worth checking out.