Huge update of the Beta 11

Every time we are working on the new interesting features, I can’t wait to release them to make you have the same fun we have while testing and polishing 🙂

This time we are releasing the features which allow you to get even deeper into the football world of the game. However, their beauty will uncover only after 5-6 game seasons.

Now, you will be able to:

You can continue playing already started campaigns but the history will start saving only from the end of your current season.

Open the Tables screen and click on any club. The button “Club” will appear at the bottom of the screen. This button opens the Team’s information screen.

You can also click on any club in the continental cups tables to be able to follow the clubs from other countries. 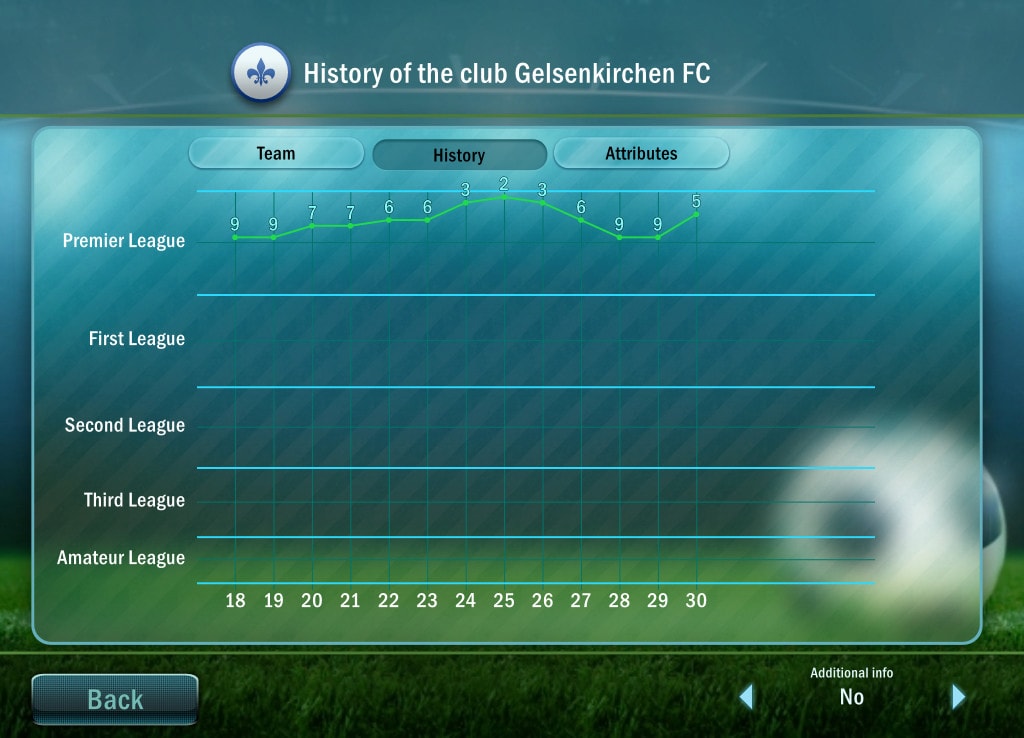 At the bottom of the screen, you can choose another way to represent the graph. For example, the Tropheys graph shows which tournaments the team won. After hovering over the cup icon you will see the hint with the name of the tournament. 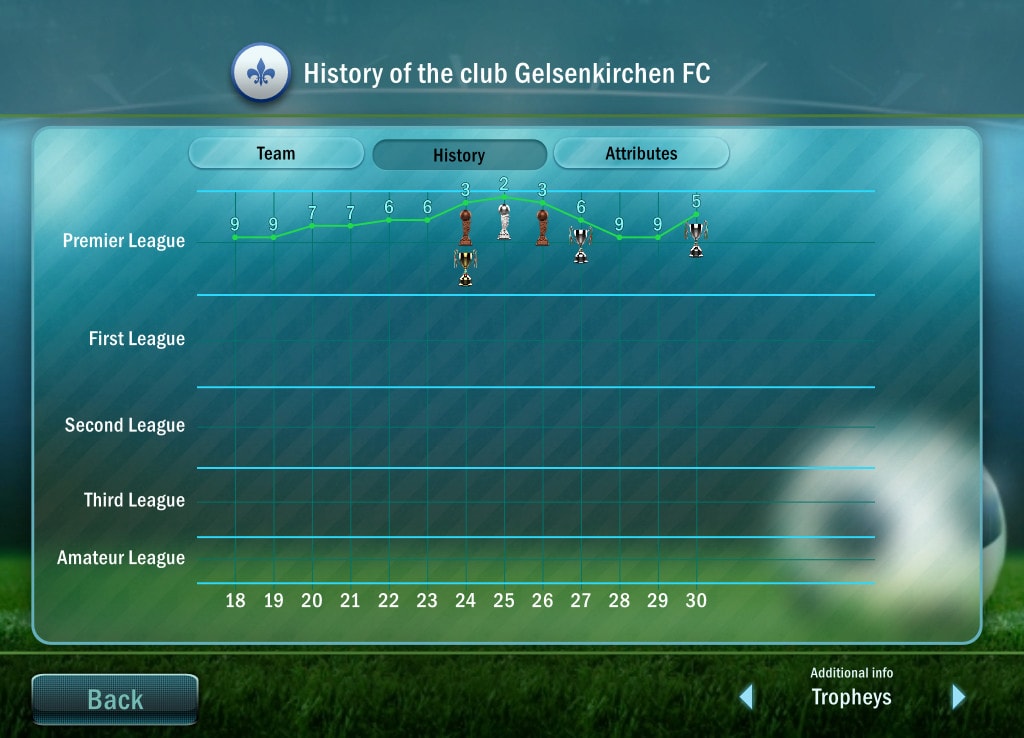 With this option, it is easier to see that the club had a peak of a success from 2024 to 2027th years (in 2027th the club played in the finals of the National cup of Germany).

You can also compare the club’s position in the league with its power this year: 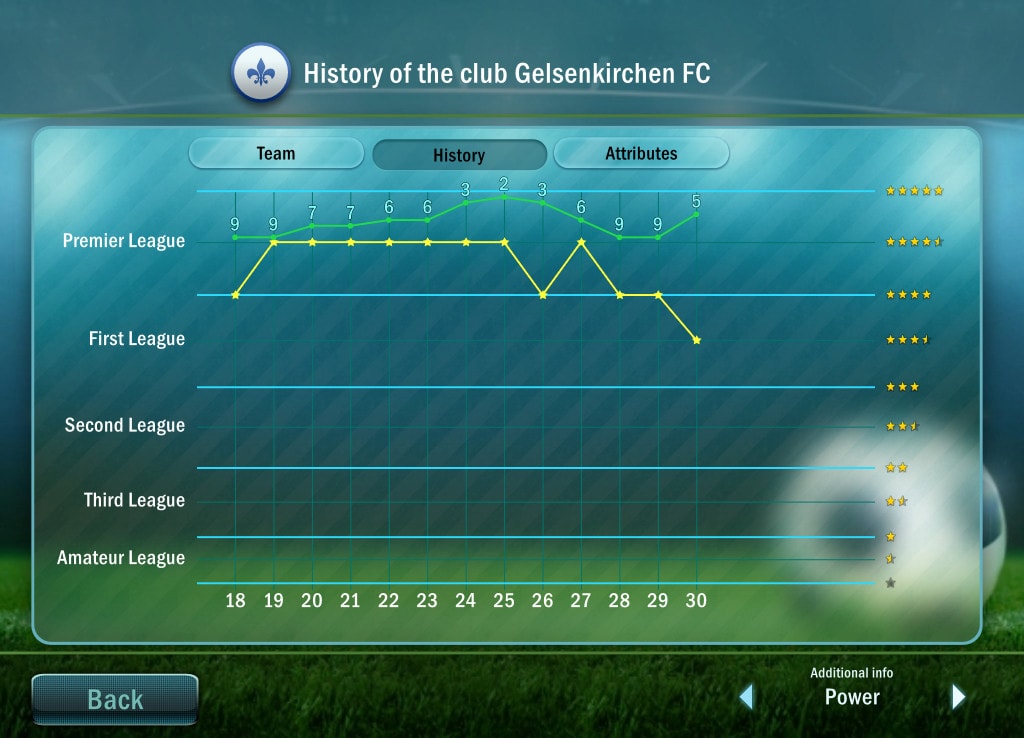 We can guess that the club lost an important footballer and so its power weakened in 2026. As a result, the club fell to 6th place in 2027th.

It seems that there were serious changes at this time. So even after returning its power, the team began to lose matches. And so the club began to lose the power again. Maybe, there was a lack of money on the new footballers, maybe they started to use the young players. The last guess is probably more correct because after only a few years the club was able to win 5th place in the league.

The longer your campaign is played, the more such stories you can see through the graphs.

The last tab allows you to change the attributes of the club.

Let’s say you started the campaign long before you learned about the existence of modifications. Or you decided to give the funnier names to the clubs. Or decided to experiment with the clubs’ colours.

Now, you will be able to change everything at any moment. 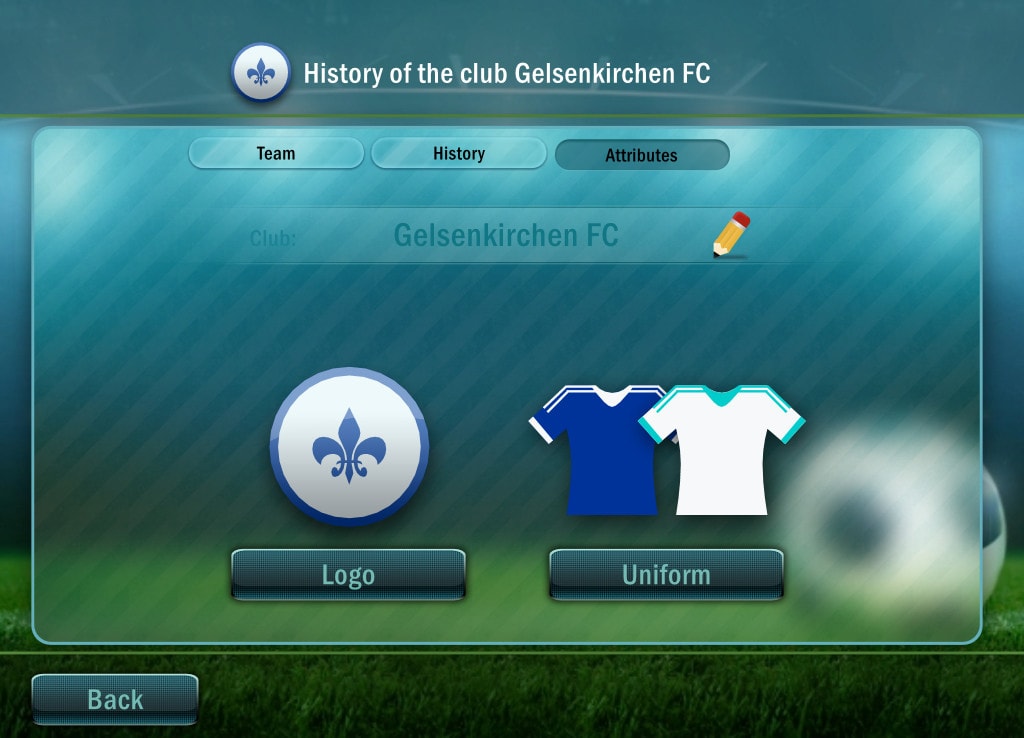 After we added the living transfers, we began to want to know more about footballers’ histories. Which clubs were they playing in? How many goals have they scored last season? Which club did they start their careers? How does your footballer play after moving to another club? 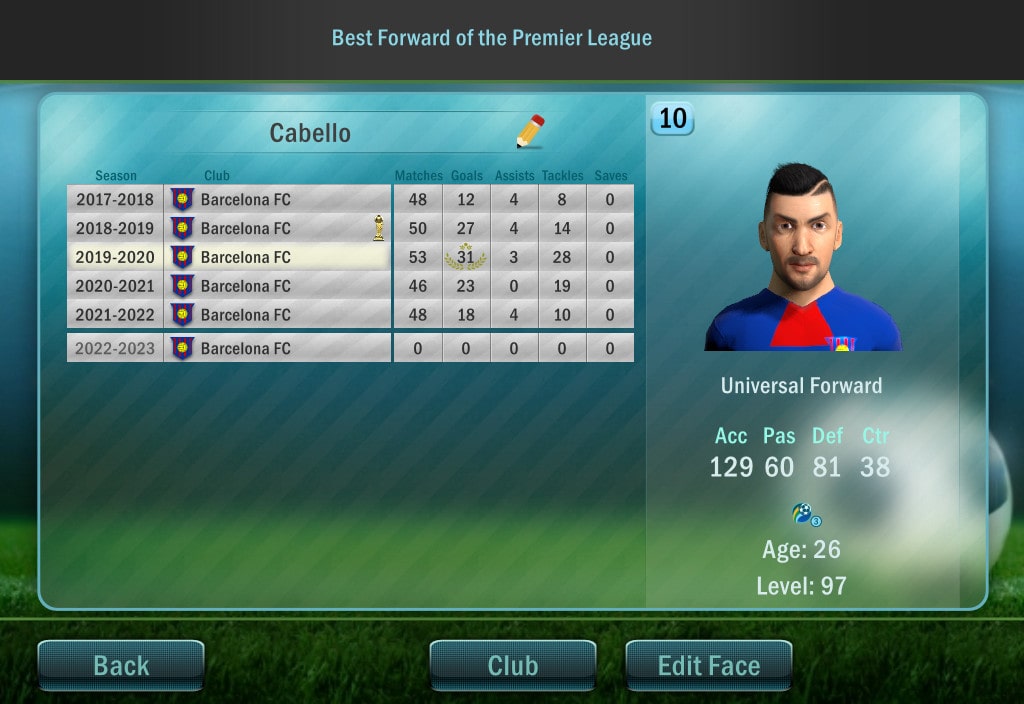 What do you see here?

That’s not all, though. There are some small neat things which will make this screen even more useful.

I’m not saying about the possibility to change the name or face for any footballer in the league. You have already understood that we always try to give you more editing freedom when we see such a possibility.

Well, if you can investigate a club’s history from the “Tables” screen, why do not do it directly from the “Career” screen? After all, you might be wondering: how well did the club play in the year in which this footballer was the best striker.

Choose a club in the season of your interest and click the ‘Club’ button.

In the opened “History” screen, the chosen year will be highlighted by the light line. 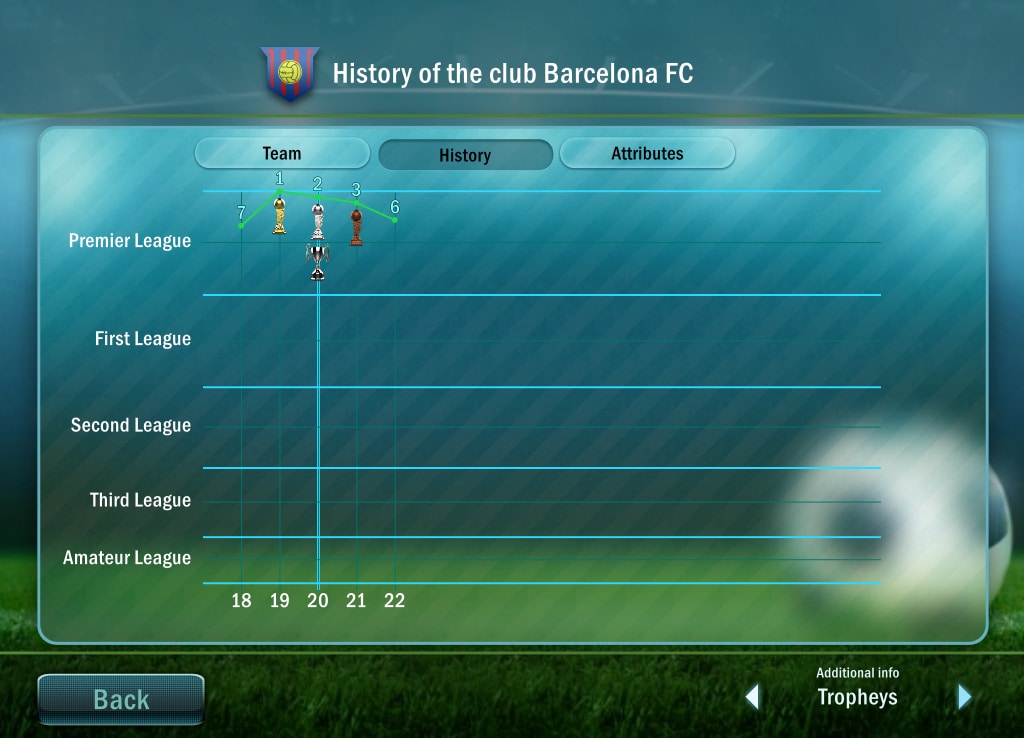 Yeah, this year the club did not become a champion, but it took the second place and reached the final of the National Cup. Not a bad year.

And one more little detail. Let’s see the career of a footballer who has changed three clubs: 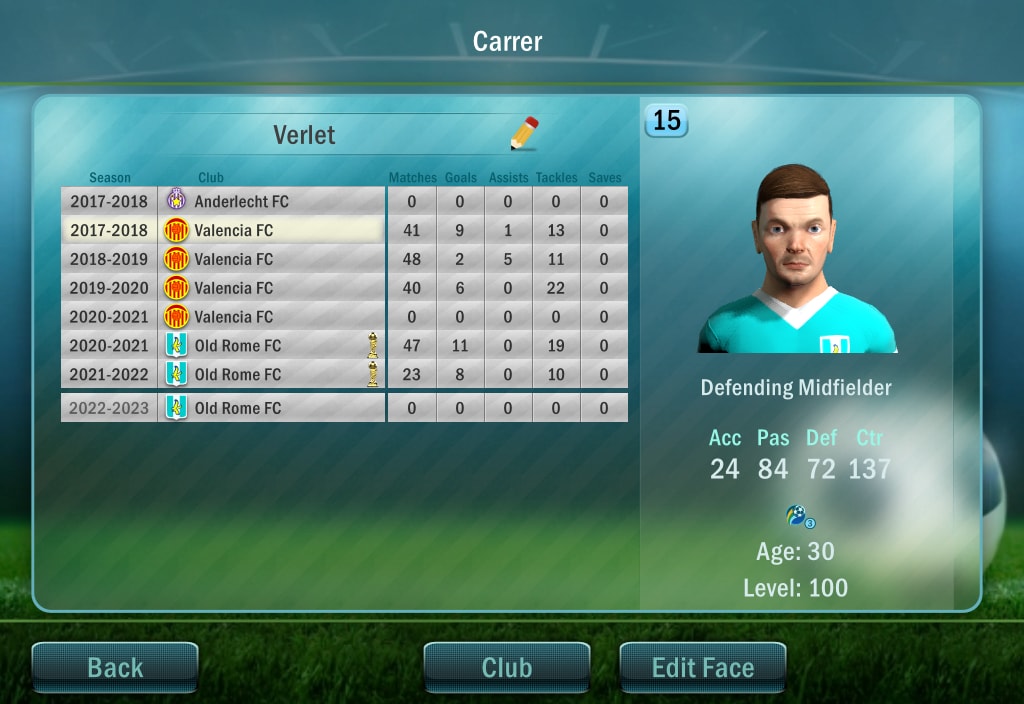 In the first transfer window, he moved to Valencia FC. If you click the ‘Club’ button, the years that the footballer spent in this club will be painted in white. 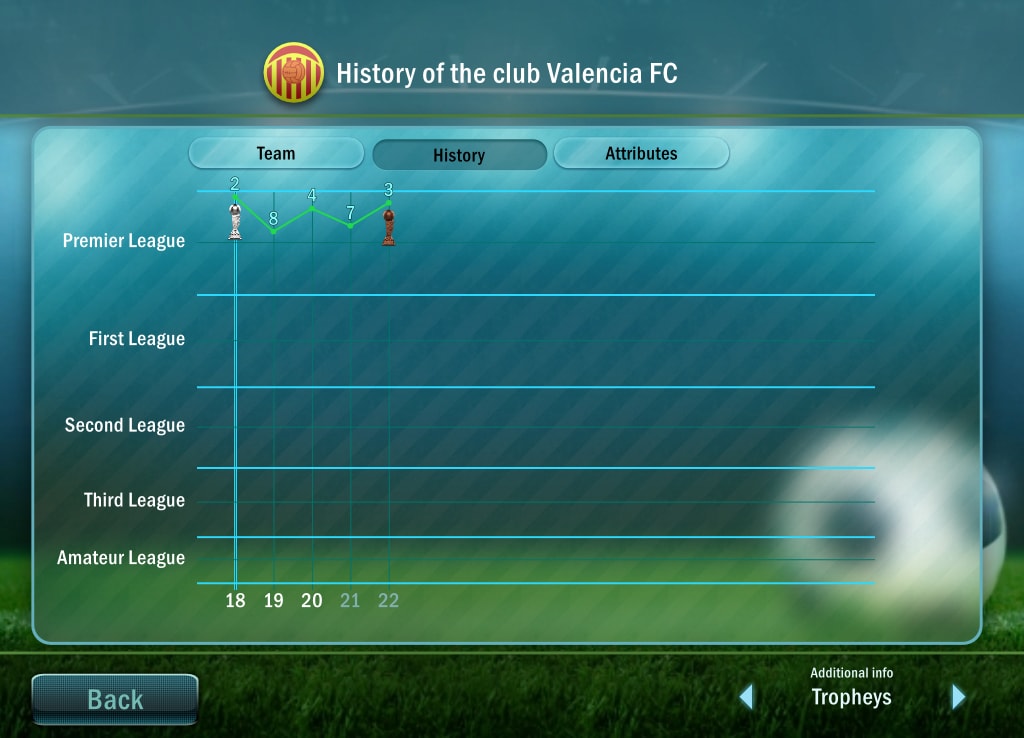 Thus, it will be easier for you to relate the career of the football player with the history of the club.

But that’s not all. We made sure that the history of any footballer and any club was just a few clicks away from you. Therefore, added the opportunity to view not only the history of the club but also the roster of any team.

In the current Steam’s version of the game, you can see only those footballers you are playing against today. In the previous Beta version, you could see the footballers from the top-10 and transfer lists.

But now, we give you the possibility to see the roster of any team.

So we added an additional tab in the “History” screen. It significantly widens your possibilities in the exploring your football world. 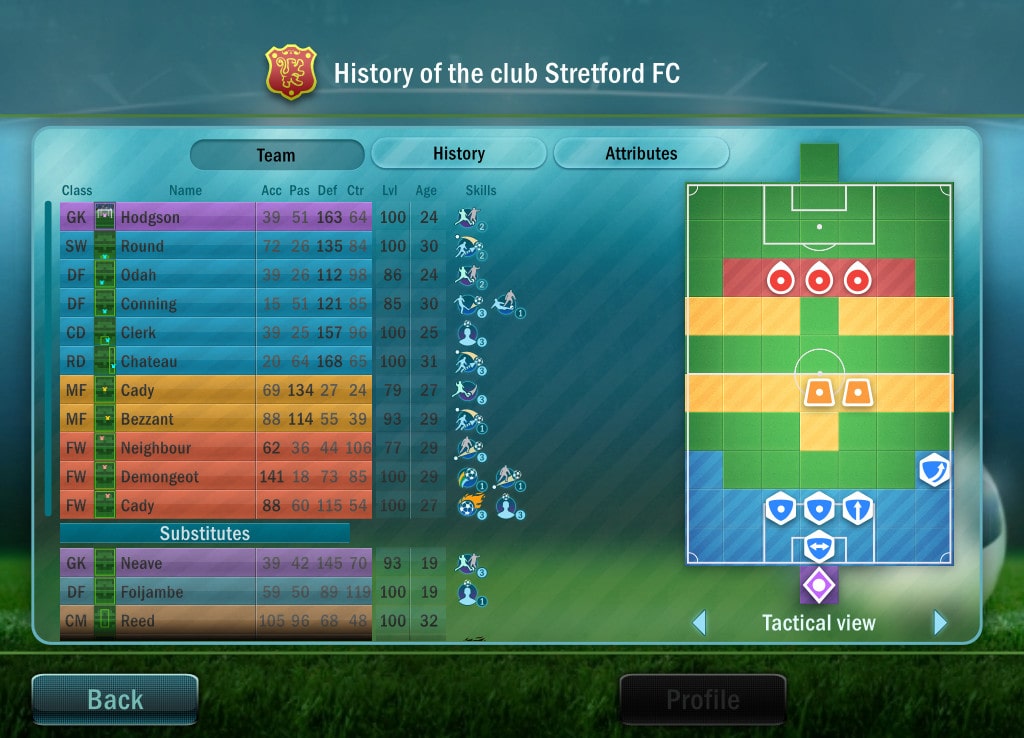 Here’s a simple scenario of your new possibilities: imagine you got interested in a footballer. For example, you would like to know more about this year’s best striker. You open his career. From here you see that previously he played for another great club. You open the club’s history directly from the current screen. Investigate another club’s history and its current roster. Among the footballers of this club, you see the player with a familiar name. Out of curiosity, you investigate the career of this footballer directly from the club’s screen. And you see that this player played in your club 8 years ago, that’s why his name was so familiar.

You won’t need to press “Back” button many times. When you are deep enough, we will exit the history after just one click.

We changed the structure of the world simulation. So if you continue playing the old campaign, you might see the weird formations. It’s a legacy of the old data structure.

Don’t worry, the clubs will begin to use the new system at the start of the next transfer window.

Hints inside the match

Together with the new features for the experienced players, we try to add the features for those who don’t know the game very well. It’s always sad to read when someone drops playing our game because he didn’t figure out how the game mechanics work.

I’m sure that the new feature might be useful for some FTG veterans as well. Because it will help to understand some game’s nuances.

Well, here you go – the hints inside the match! 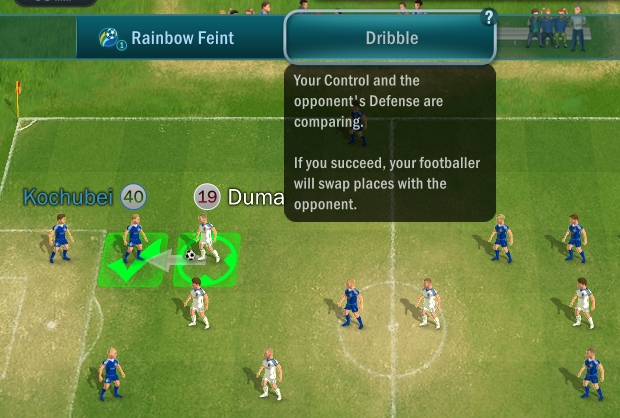 Now, for every in-game action, we inform what attributes are using. If there are bonuses or penalties, we inform about that.

Just hover over the question icon to see the hint.

We really hope you will love the new features as much as we do!

Share your stories and historical graphs! After all, everyone has his own unique football universe 😉

Feedback, information about crashes and bugs, what you like and what you dislike, write, please, in the special forum thread about Beta.