While Early Access is famous for the many games which are unfinished, buggy and very raw, our rule is to release only polished and fun versions of Football Tactics.

That’s why we haven’t released the next update yet. The main mechanics work perfectly, the game is fun. But there are still too many unpolished parts. Temporary graphics, not translated texts, no animations etc.

Despite this, many of you were asking us to open the access to the update early. So firstly, we ran the closed Beta, where a few players helped us to find the most important problems. Many thanks to them!

And wow we open access to the Beta for all who purchased the game.

However, before you decide to play the Beta, we want to make a few warnings and give additional information.

1. WHAT IS ABSENT IN BETA

2. HOW THE NEW MECHANICS WORK?

While the tutorial messages are not translated, the basics of the new mechanics you can read in this document.

There are so-o-o many big and, especially, small changes comparing to the Steam version of the game, that we decided to write the final changes list only after releasing the Update 10.

3. HOW TO START PLAYING BETA? 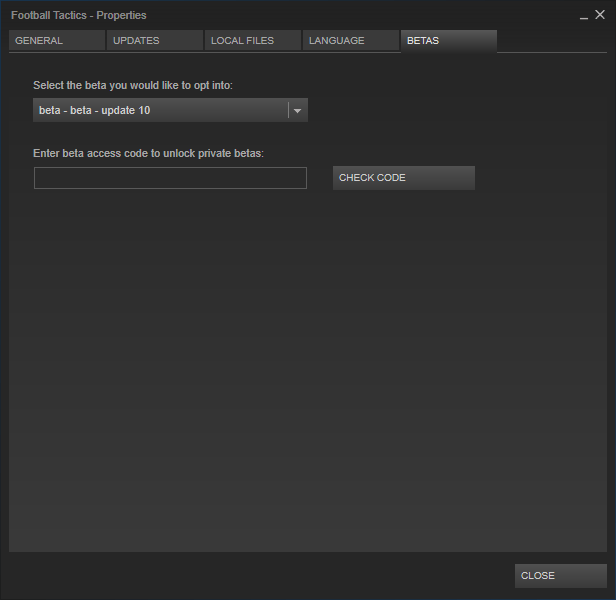 Click on Football Tactics in your Steam library with right mouse button. Select “Properties”. In the appeared window open the last tab and select “beta – update 10”.

If you have a feedback, comments or problems regarding the Beta, you can write about them in the special thread on the forum.

Even though the beta is not polished enough (it’s the Beta, after all, right?), it’s allowed to record youtube videos and make streams. For us, it’s not only the possibility to gather new players, it’s also the possibility to improve the game. We can watch how do you play, what problems do you have, what is understandable, what is not, etc.

So even if you are not a professional youtuber/streamer, we anyway will be glad to watch your videos about Football Tactics.

We are very proud that we were able to improve Football Tactics so much. And we really hope you will have fun with the game (even though it’s not in the final stage).