The newly released Update 10 is proof of our ambitions and a huge step towards making the game great.

In the previous version, after 40-80 hours you could understand the basic tactics that work in most cases, and use only them.

In the update, the variability of tactics is so diverse that you should prepare your team for each match. Because for any tactic there is a counter tactic.

From this article, you will learn about some key features which make the game much more fun.

1) New classes (roles on the pitch)

Previously, the game had 4 classes: forwards, midfielders, defenders, and goalkeepers. Each of these classes had its own characteristics.

However, over time, we saw that 4 classes do not create enough variety in tactics and the game as a whole. The flanks did not work, the players did not differ much from each other, some tactics were obviously universal.

Therefore, we went further and created a system of classes similar to real football, where players are responsible for some zones on a pitch. At the same time, we retained the idea that some players can be useful in the whole field, not only in their narrow zone. So there are 4 universal classes, 9 special classes, and 4 amateur classes.

Each class has its own unique abilities. For example, the Attacking midfielder may perform a false kick. The defender of the opponent seeks to intercept the ‘kick’ and leaves his position. As a result, you can use the open space for your attack.

Or let’s take a Sweeper. If he stands alone on the last line of defense, he automatically tends to take a position opposite the ball. This allows you to cover the main directions of the attack.

At the same time, you always have the opportunity to prevent the enemy from using his clever tactics, if you realize in advance that he plans to use it. There are always counter tactics to everything opponent can come with.

In the previous version of Football Tactics, players received experience for playing in matches, raising their overall level. In the update, the footballers also have a separate specialization level. It determines the uniqueness of the player. 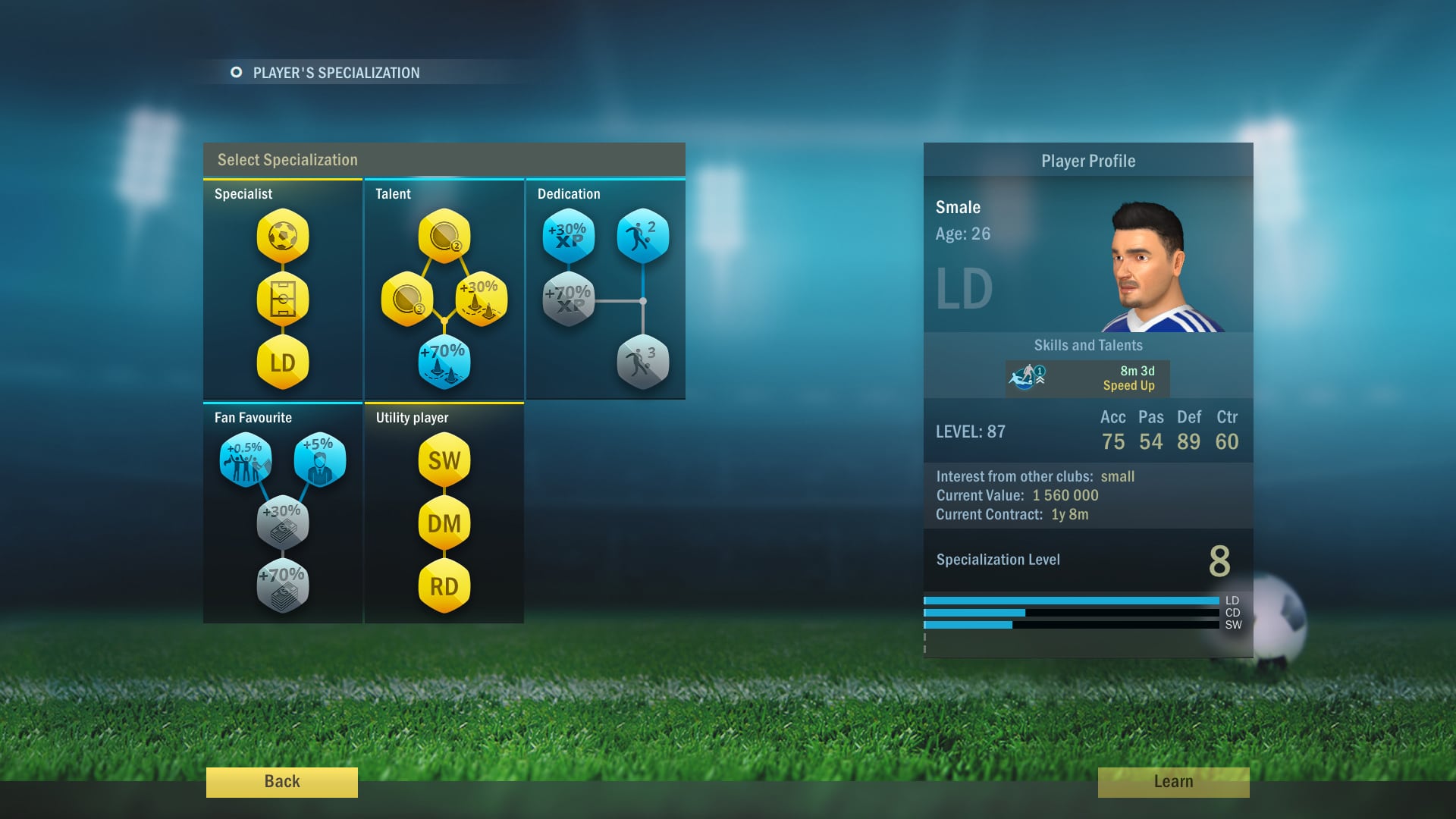 When a footballer has learned to play at his position, earning the specialization XP allows you to develop the player in the direction that is important for you.
For example, you can focus on learning skills, on increasing the attributes or on making the player to be fans’ favourite. When fans love the footballer, they are more interested in attending your matches, and the sponsors are ready to pay more for fulfilling their conditions.

The sponsors increased payments by as much as 20% due to the fact that your team has 4 fan favourites.

Such (RPGish) leveling gives you the opportunity to plan ahead the development of your club. With some players, you will score goals, and with some – attract fans and sponsors.

By the way, the specialization screen is an example of how we plan to remake our entire interface by the release of the game from Early Access.

As soon as we released the game in the Early Access, the players asked us to add the head play. For a long time, we worked out how it should work in the whole tactics, how to make it a full-fledged part of the game.

Initially, we thought it’s enough if the head play is a part of the lofted passes.

But over time, we realized that it’s not enough. It should be a part of something bigger. In real life, a good performance on the wings is important for successful headers. After all, the ball flies to the attackers from the flanks.

I want to recall you that in order to perform a cross, a footballer with the ball should stand in one of the four corner tiles on the opponent’s side. Teammates having the Head play talent can be positioned in the opponent’s penalty area, or in rows two and three opposite the penalty area. When all the conditions for availability are met, select the footballer with the ball and a tile on the opposite side of the goal will be highlighted. Click on that tile to perform a cross. Also, you can perform crosses from the corners.

Football Tactics – might not look like a serious game. But inside, there are a lot of hidden mechanics which start to live when you start a new campaign.

So if earlier we could limit ourselves to dozens of coach’s notes, in the new update, the amount of information that would be useful to take into account overstepped the limits of the “not so serious” game.

Therefore, we have added footballpedia which explains practically all aspects: what are abilities of each class, what you need to know about each game action, the details of performing the skills, how the players’ transfer value is formed, what hidden characteristics of footballers there are, etc.

We also advise everyone, including veterans of the previous version of Football Tactics, to play the game with the ‘Tutorial’ option enabled. You will receive information from the old coach who will try to get acquainted you with all the main features of the game.

5) Updated messages and your assistants

You are the central hero of the game. You are a football manager who leads the team to the top of the world football due to your brilliant mind.

But apart from you, there are other characters in the football world: your assistants, the president of the club. Previously, they were hidden behind abstract-looking messages. Therefore, you had to force yourself to believe in the game world. 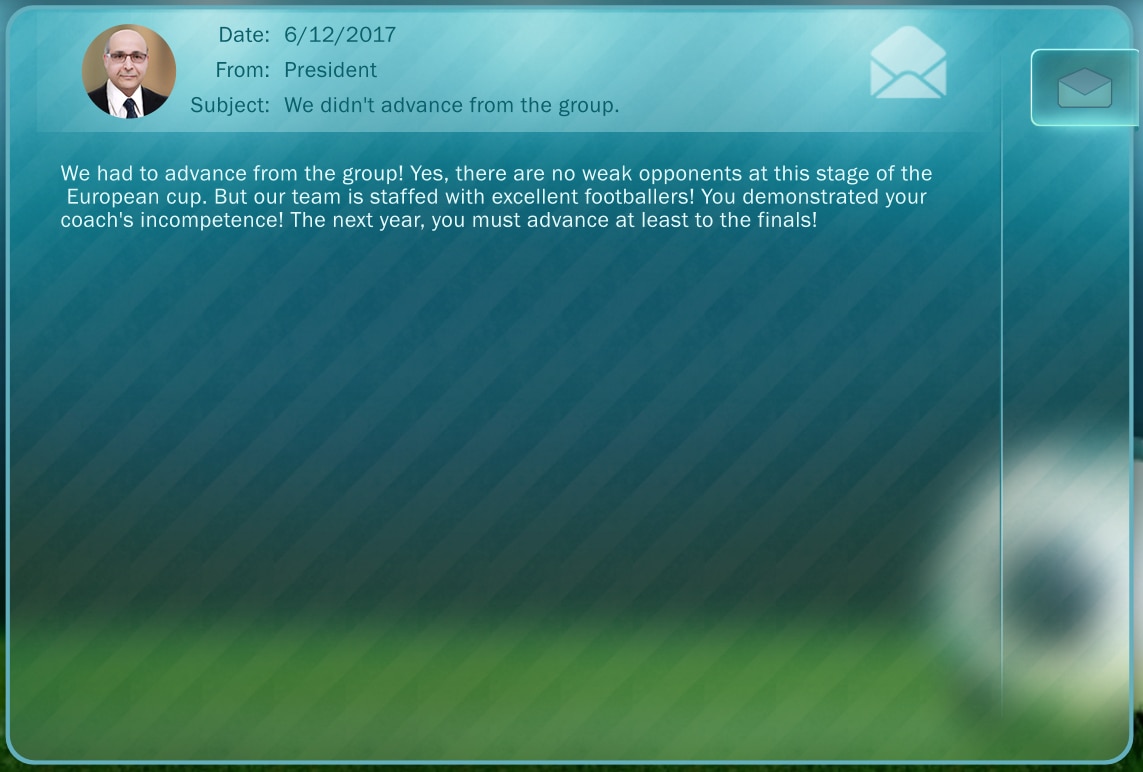 In this update, finally, you get to know the characters closer. Now, each message contains the date, subject, name, and photo of the sender.

And while your assistants’ role is only to inform you about your progress and the situation in your team, the president of the club and the old coach show more character and attitude towards you in the letters. 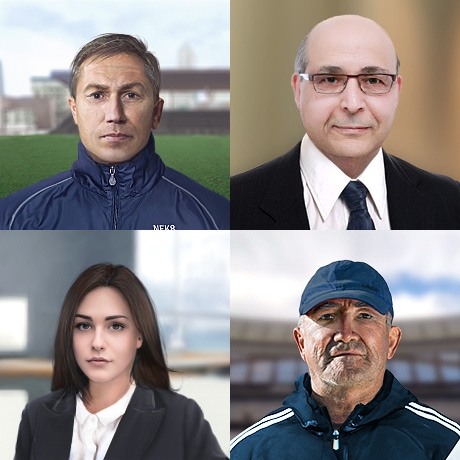 Remember, how you wondered, why there is no choice in the skills learning window? Now there it is! Moreover, this choice is interesting. Footballers have different affinities to different skills, so you have to decide if you want to learn any skill as fast as possible or maybe take some time for more important skill. 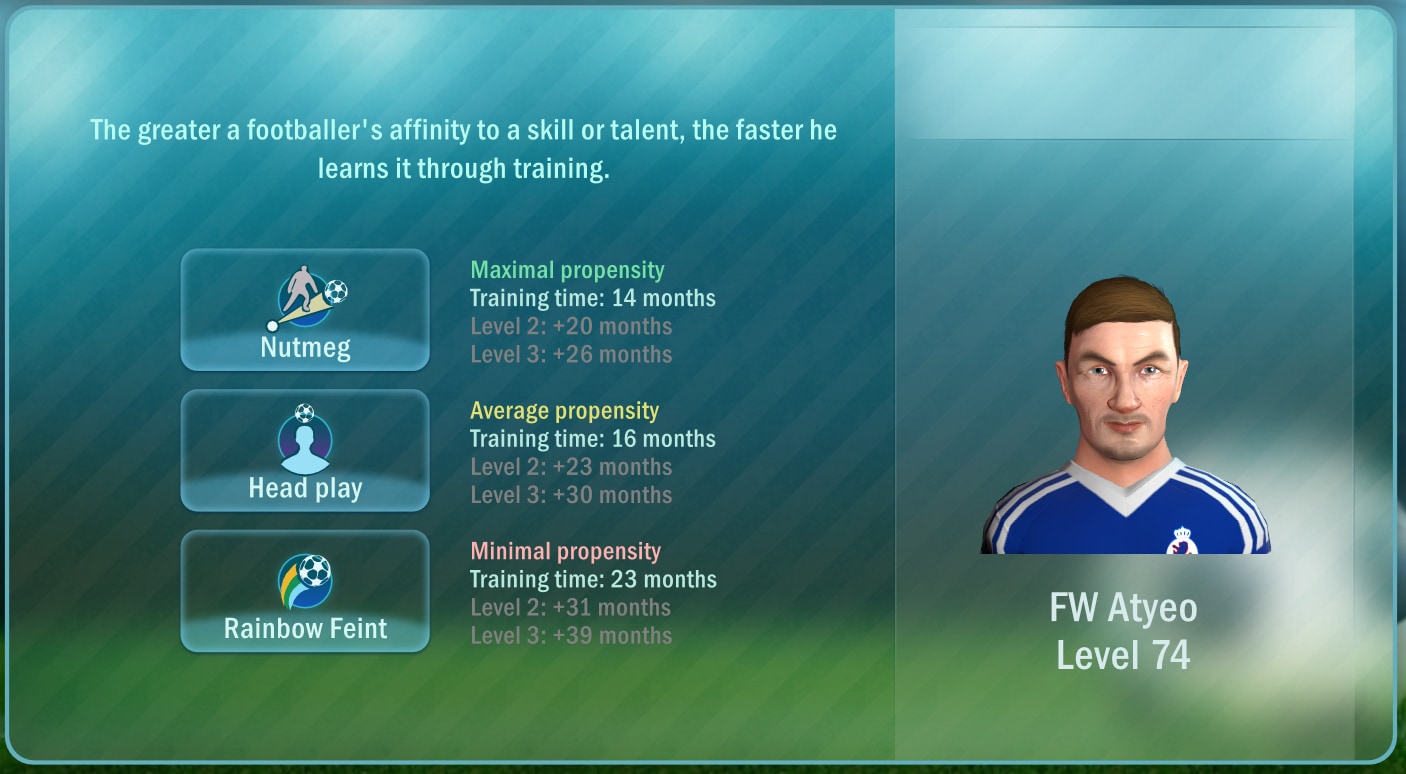 We always try to make the game more pleasant and comfortable for players. We watch the lets plays on Youtube, read your feedback and try to understand where you have the biggest difficulties.

In this update, we added one of the most anticipated features to improve the comfort in the game – it is the opponent viewing screen. 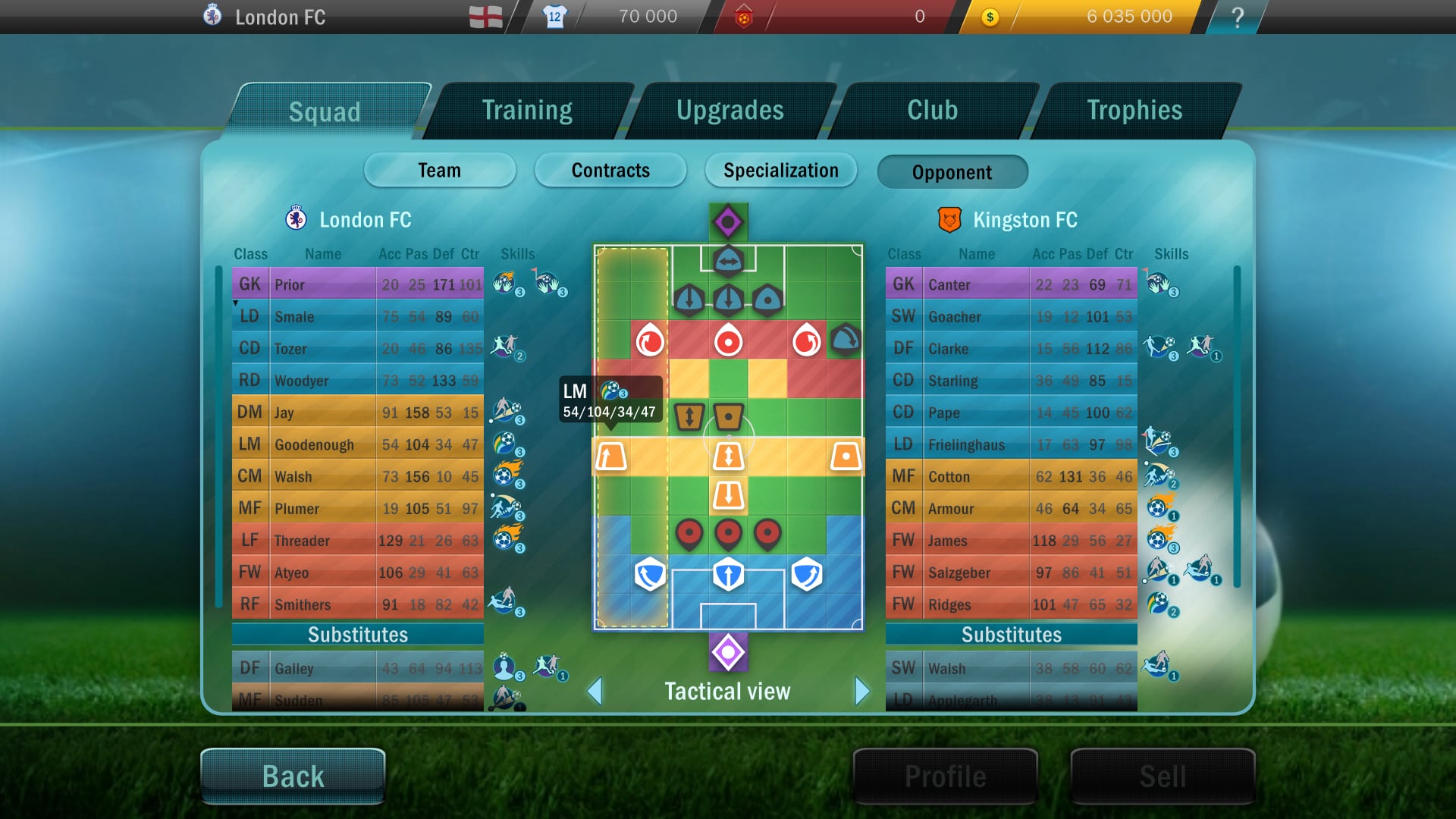 Remember how you had to go to the opponent’s screen before and turn his team upside down in your imagination to understand how to better build your tactics. Now, you can study the enemy in details and prepare the optimal tactics for the next match in comfort.

By the way, tactical icons also appeared only in this update. They make it easy to understand the positioning of every class.

Another big step forward is 3D arrows for lofted passes and visualization of the diameters for all types of passes.

Many times we have seen how players don’t understand why the lofted pass is accessible, but the pass is not. Now you can see the distances for all kinds of passes.

There are a lot of other improvements that I would like to tell you about. It’s the opportunity to start the game directly from Premier League, and the possibility to customize every detail of the footballers in the editor, and many fixed bugs, and greatly improved AI, and really hard difficulty mode, and the ability to kick out the ball, and the opportunity to throw it in 🙂

We put our souls into the game, trying to make it as interesting and deep as possible. Hope everyone has found something which made him be happy after the update 😉

A more detailed list of changes you can read here:

The beta version is not updating now. To continue playing, you need to exit the beta. After the release of this update, we will fix some bugs, improve some game elements, add some translations. All updates will be now only in the main version of the game.

If you see small updates to the main version, know that it’s fixed bugs and crashes. If there is something valuable, I’ll write in the news section.

Expect the next big update in few months.

This all would not have been possible without you, without your comments, feedback, participation in the beta, the purchase of the game.

Thank you very much for your help! 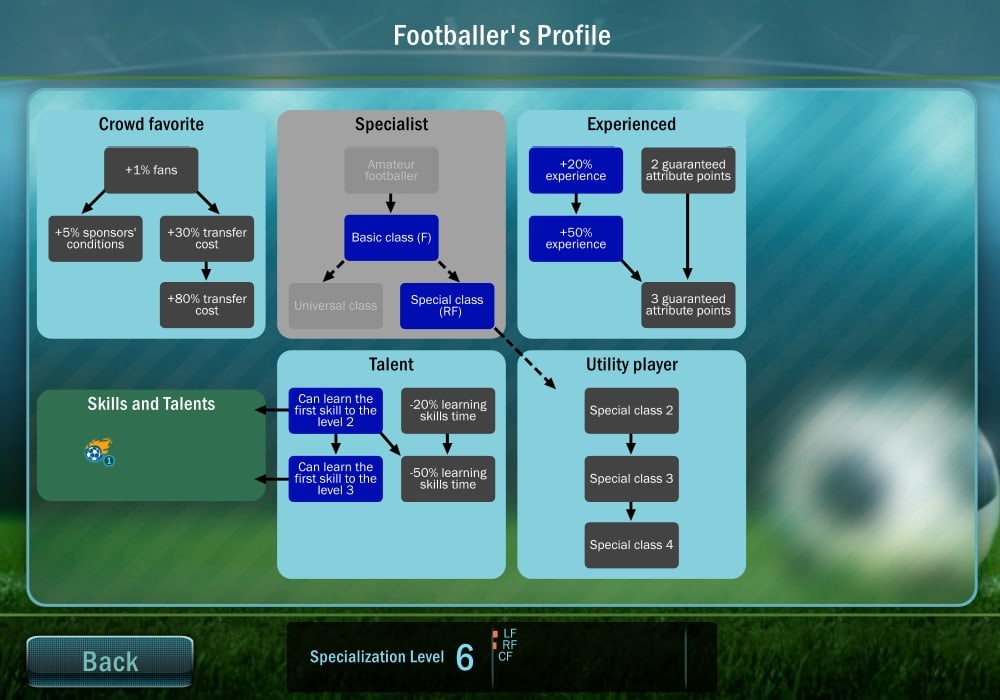 It is how the screen of footballers specialization looked like during the prototyping period.

It is how the animations of crossing looked like during the prototyping period and how they look like now: