What to expect from the next add-on (Part 1) 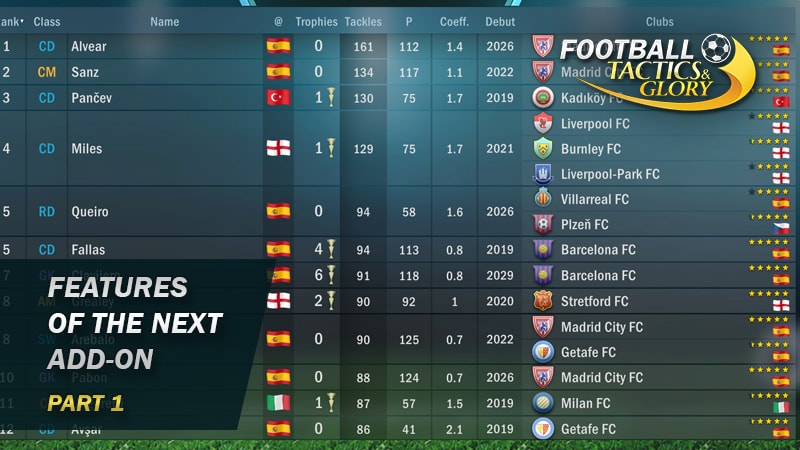 While we are working on the next add-on, I will tell about new features we have already made for this add-on.

Today I want to talk about statistics that will be displayed for each tournament.

The screenshots below might be not final. There are some elements which will be polished later.

Here, you will find the main information about the chosen tournament be it Third League or European Cup. 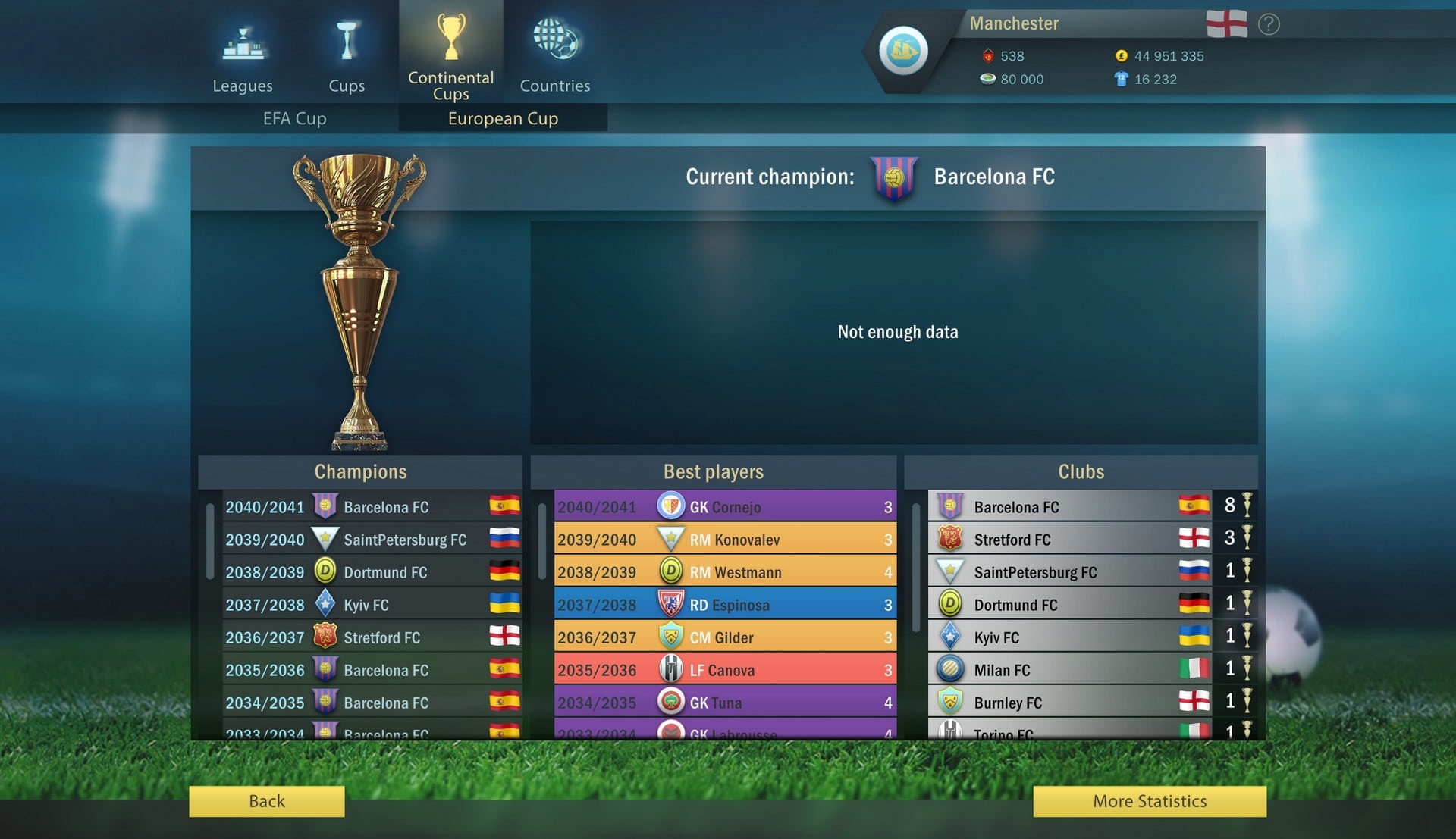 In the place where ‘Not enough data’ is written, the most interesting statistical information about the tournament will be displayed. For example, the club that scored the most goals; the country with the most trophies; etc. This information we have not added to this screen yet.

It’s a list with all the champions with the details about played matches, wins, loses, scored and missed goals etc. 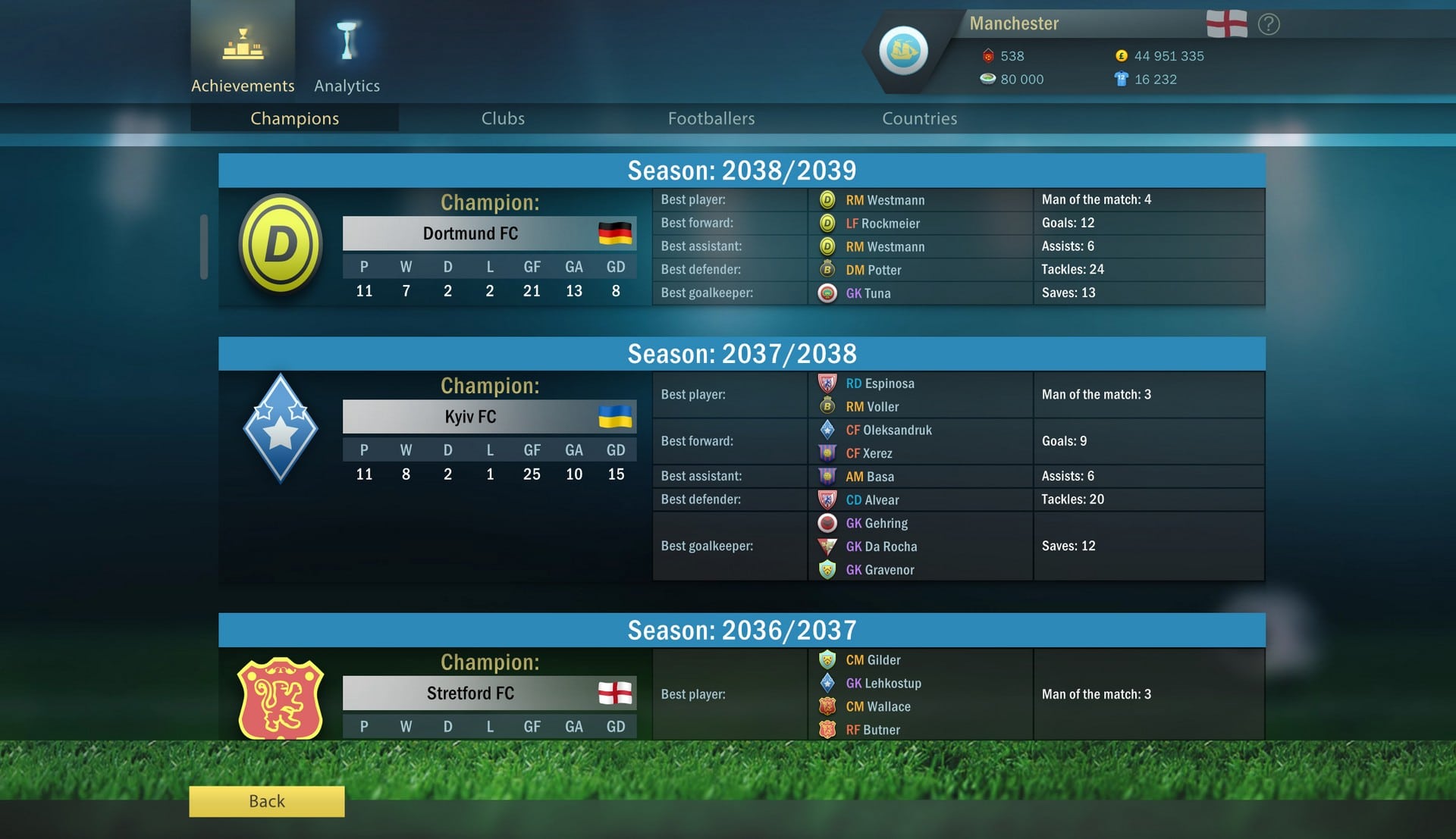 Also, here you will see the best players in the tournament for each season.

This and the following three screens are my favourites.

Here you can see the history of the performance of all clubs for each tournament individually. 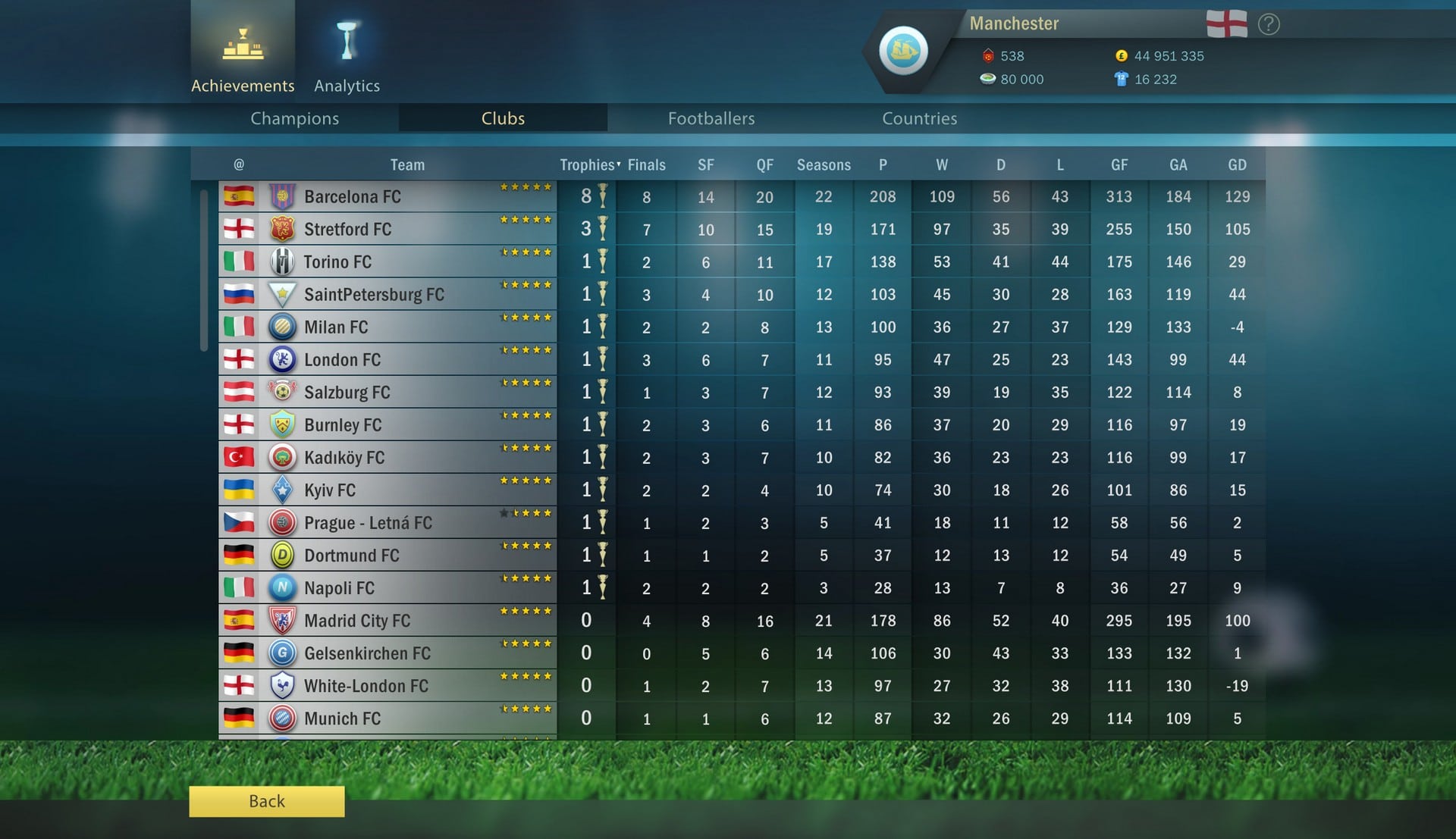 In addition to basic information, here you can compare clubs according to the following stats:

After 10 or more seasons, this table is filled with the history of ups and downs. It is especially interesting to dig into the statistics of clubs in international tournaments.

The tables on this and all subsequent screens can be sorted by different stats. If you want to sort the teams by the number of matches played in the tournament or the number of defeats in the finals – you will be able to do it easily.

This is also a very interesting screen, the whole charm of which is revealed after 10 or more seasons.

It displays the top 20 players of the tournament in different categories (best scorer, best goalkeeper, etc.) in its entire history. 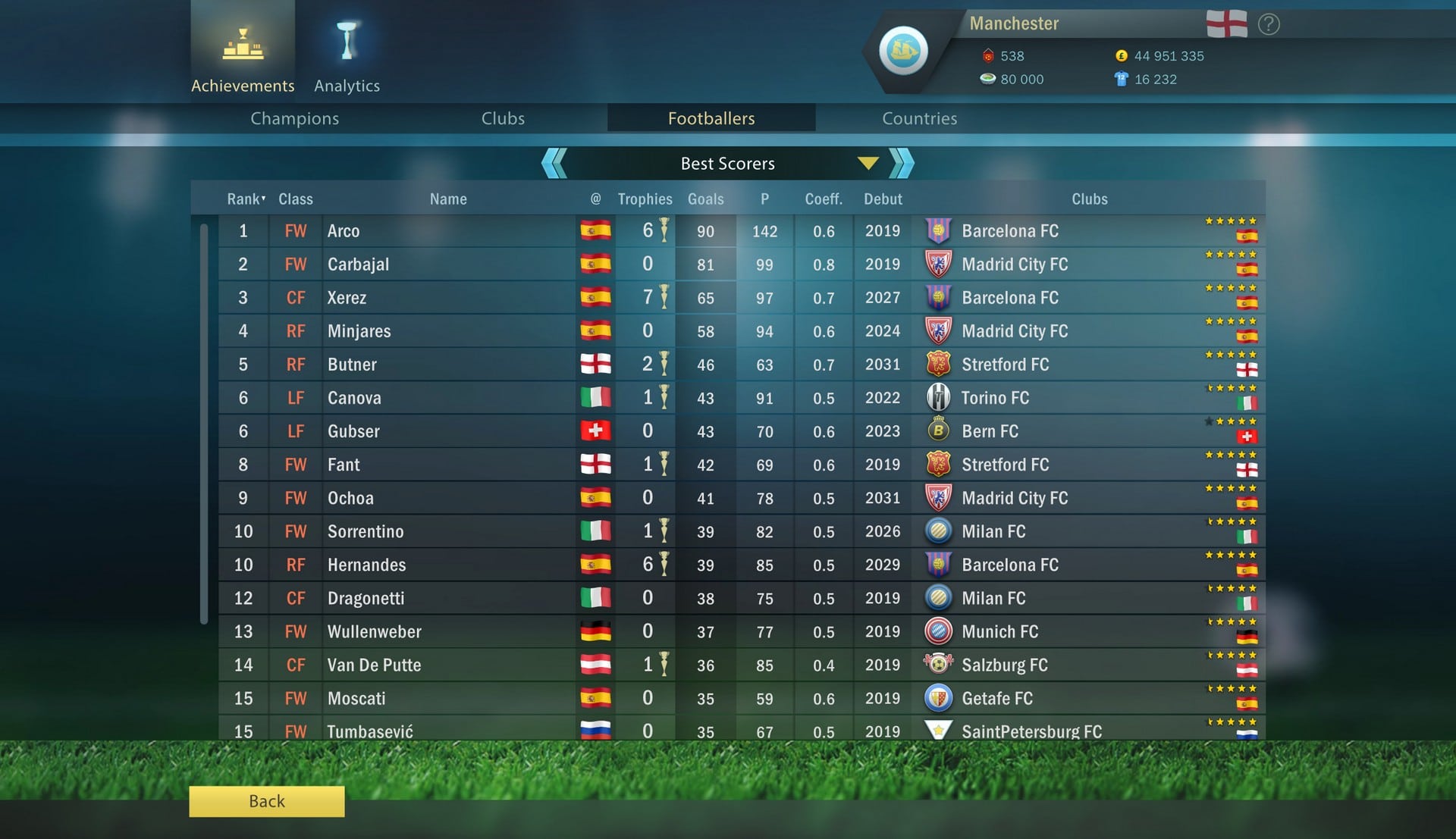 I like that after dozens of seasons in the table will be both football players who set records in the early years and beginners. This can be seen in the “Debut” column.

Another very interesting screen, which is displayed only for continental tournaments. 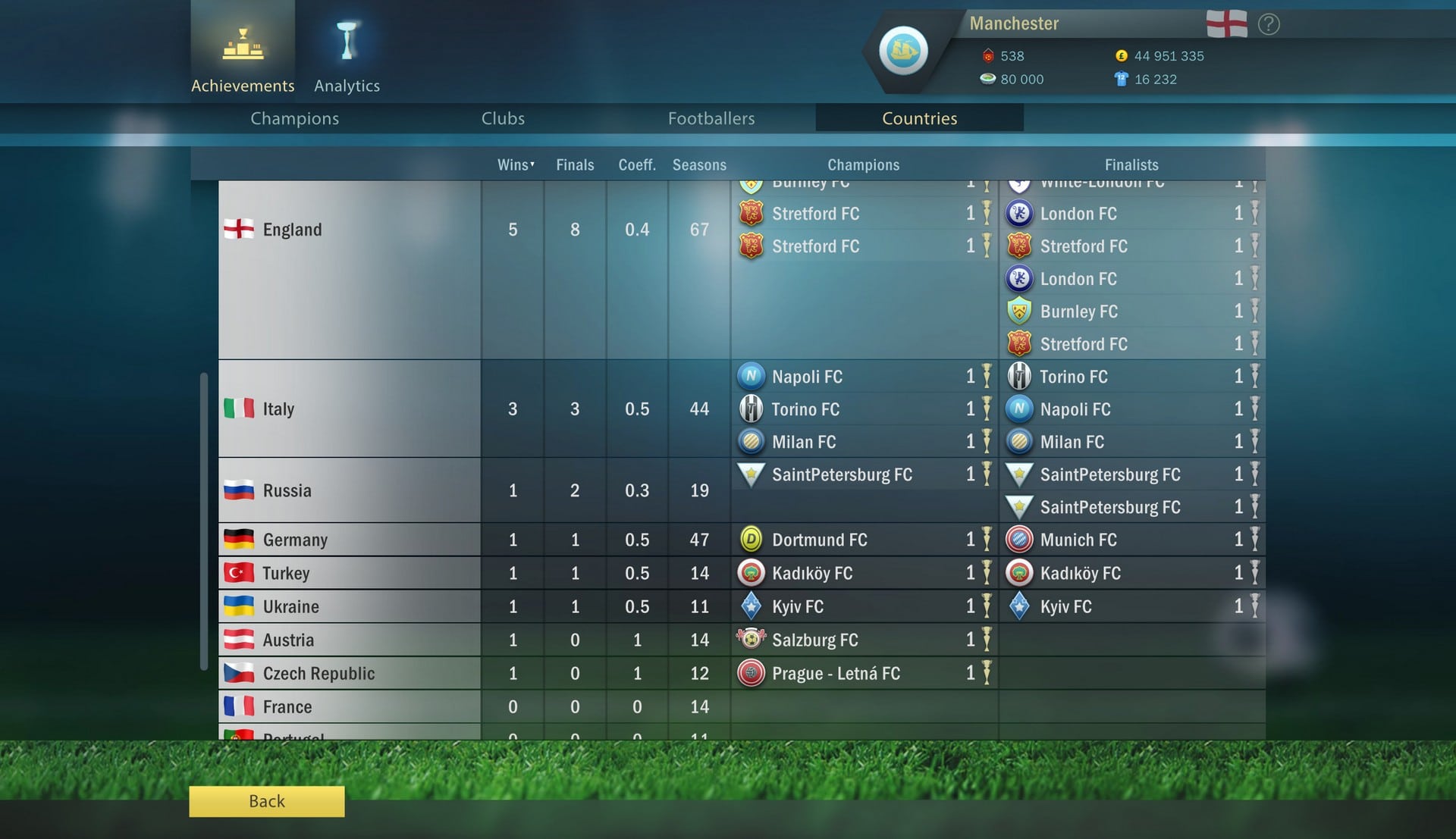 It shows how well different countries perform in these tournaments. Also on this screen, you can see all the winners and all the finalists of the chosen tournament.

If you were pleased with the information about any of these statistics, I would be glad to know what you were most interested in. Also, if you have any questions or suggestions – feel free to write in the commentaries.