Today we want to tell you about current process of development the next big update #10.

Its goal is to make the match tactics even deeper. Much deeper. Part of this task was adding some currently missed elements of the real football: play in the air and flank play.

The first thing we started doing is prototyping the heading mechanics. They should have worked in the following situations:

Long time we couldn’t make the new mechanics at the same moment a) realistic, b) tactical and c) not overloaded with “dice rolls”. When you make a cross, many footballers in the goal zone will fight for the ball in the air. And so there can be many rolls: do you cross successfully? does the first footballer kick the ball? if he does, does he aimed in the goal? if he does, does he scored the goal? at the same moment, there can be a fight in the air for this ball. After all these calculations, we should calculate the same for the next footballers. We should have simplified it.

Now, after many iterations, I have a pleasure to say that heading mechanics add fun, new tactics and many new unexpected situations to the game 🙂

Earlier, it was hard to perform lofted pass successfully but if it is successful, you are guaranteed to get the ball. Now the lofted passes are easier to perform. However, you should think about positioning on the pitch. Opponent’s footballers can intercept the ball or fight for the ball in the air.

The animation shows the fight in the air.

Crosses add a lot of fun as well. It’s a new tactical element which you should consider in your attacks.

Every footballer can kick the ball with his head. But some of the footballers can do it better. They have a talent Head play (good name for the talent?). 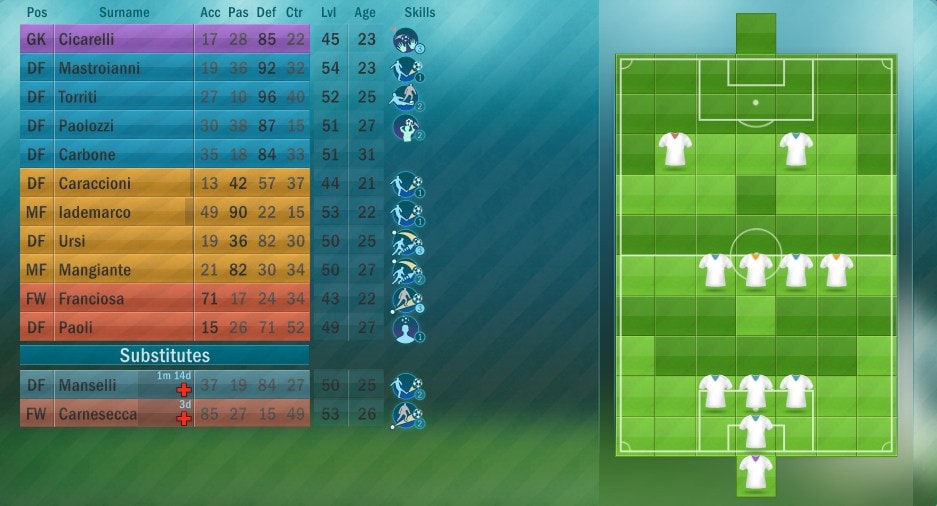 The screenshot shows two new talents. Can you spot them?

When we testing the new mechanics, we often see interesting patterns. For example, you have to have the defenders with the Head play talent to be able to defend your goal from lofted passes and crossings. In the real life, it would mean that you keep tall defenders.

The interesting thing is that when you make a corner, you will want to get these defenders to the opponent’s goal zone. Because they have high chance to score a goal using their heads. Quite realistic, isn’t it? 😉

Btw, you could notice one more change on the screenshot above. We decreased the size of the footballer’s lists. Now the screens will be able to show more information. At the same moment, we work really hard on keeping the game understandable and not overloaded with unnecessary data.

This change will allow us to implement one long waited improvement – add the possibility to preview the opponent’s team directly on the management screen. Also, we will be able to make some important changes to the training mechanics. But I’ll tell about it in the next news.

There is still a lot of work to do. We are going to add many new mechanics and systems. Also, we used to release only polished updates. But polishing takes more time than development itself. So I can’t say precisely when the new update will be released. I really hope to release it in 2-3 months.

The update will be so big that we consider increasing the price of the game after its release. So you have made the right choice by buying Football Tactics. You supported us, funded the new cool features, and purchased the game cheaper than you would in future 😉