How coach abilities will work 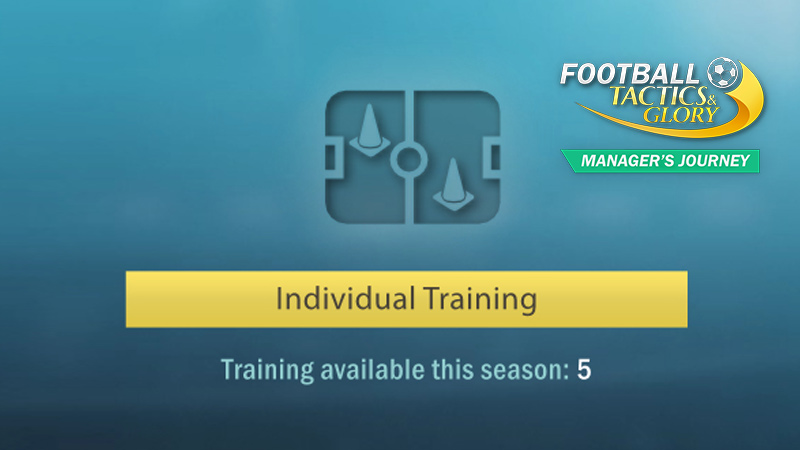 In reaction to our previous posts about the new features of Manager’s Journey, we realized that the coach abilities can be perceived as some kind of super-powers. In addition, questions have been raised about how the abilities will be used. Therefore, I decided to tell a little more about this huge set of mechanics.

Why do you need coach abilities?

In previous versions of the game, you managed only one club. You couldn’t be fired, so most of your decisions were long-term. Development of youth, learning skills, improving staff, etc.

But now, you have short-term goals. You are joining a club whose footballers can be pretty weak. Management may challenge you to reach the cup final or promote to the next league. In one season, you must somehow put the team in order and fulfil the set goal.

Previously, you could use a failed season as an opportunity to give young footballers a chance to develop. And now, no matter how you develop the youth, if you fail the season, you will be fired. Therefore, as a coach, you need strategic tools that provide an opportunity to improve the situation here and now.

How the abilities were developed

When developing the abilities, we used the following rules:

How the abilities will work

Glory is a measure of your authority and influence. The better your team plays, the more you are respected. Previously, you used Glory on four occasions:

Despite the fact that there were several options for spending Glory, players mainly saved this resource for hiring coaches.

But how the upgraded def coach will help you if you stay at the club for only one season? He is useless. Upgrading the coaches is an investment in the future; it does not yield short-term results.

Now, Glory will also be spent on the abilities that can help you in difficult situations.

This way, you won’t use your abilities every time you feel like it. You will think twice if it is really worth spending the Glory.

Examples of using the abilities

The game will have several different abilities related to motivating footballers before the match. For example, you can yell at your team. As a result, they will come out to the match motivated, however, they will lose a certain amount of energy. 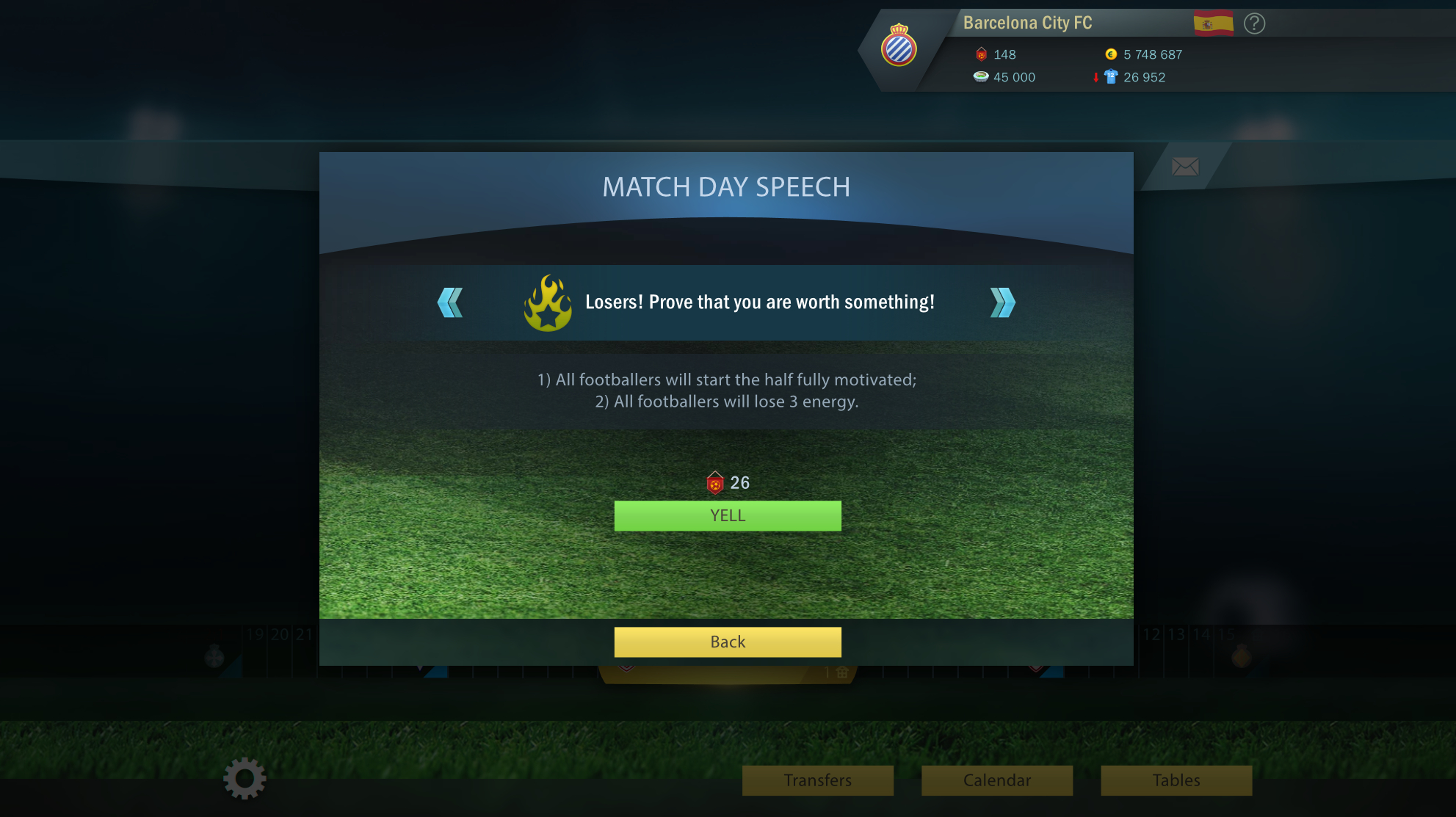 You can also use this ability before the start of the second half, which gives you some flexibility. For example, if you play an away match, and you want your chances of scoring to be increased in the first turn after kick-off, you will yell at the footballers just before the second half.

This skill does not give you a 100% chance of scoring a goal. But it increases your chances. You yourself should decide whether you need this chance now or not.

During testing, there were situations when I was upset when the motivation of the footballer did not work, and Glory was wasted. On the other hand, the feeling of yelling at the team that lead to scoring a goal right after kick-off is very pleasant. You planned, took a chance, spent Glory, and it paid off.

And when you are faced with the task of winning the cup, you need to win almost every match. Therefore, a slight increase in the chance of winning can be very beneficial.

Previously, it was possible to fully learn a skill with Glory. Overall, it was a good opportunity, but it does not fit well with the new gameplay. Instead, there will be several new training opportunities:

Additionally, some of your skills are influenced by the level of staff. Here’s a screenshot of speeding up a skill: 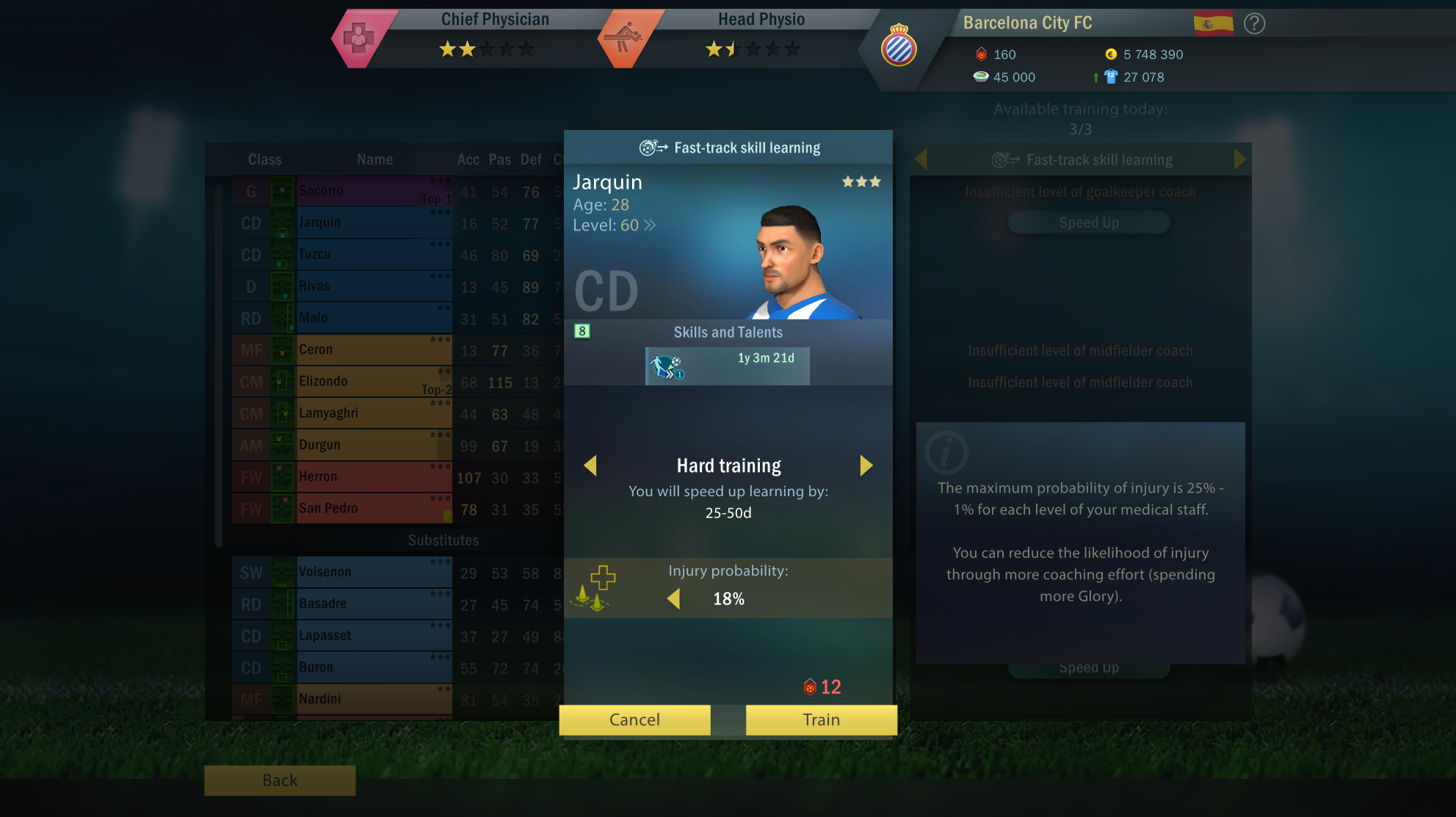 As you can see, the probability of injury could be 25%, but thanks to the upgraded medical staff, this probability is reduced. If you have a lot of Glory and don’t want to risk the footballer, you can put more effort into training (pay Glory) to further reduce this chance.

Training is not available at all times. First, you must have at least Level 1 training fields. Secondly, you need to learn the ability to conduct training in general. Further, by improving this skill and hiring more coaches, you will be able to do more training.

What do you think about coach abilities?

I really hope I managed to allay some concerns about coach abilities. But if you have questions or thoughts about this, write in the comments.