Tactics and the ability to build your own unique team have always been the core of Football, Tactics & Glory. You have to manage the club and make it stronger by overcoming such difficulties as powerful opponents, fatigue, injuries, etc.

What you’ve been missing is the sensation of the reality of this world that you “live in”. As you build your team, you want to know how other clubs and the players that you sold are doing. It would be great if you were able to buy players with a real history. It would be great to see real players’ stats, a list of best scorers, assistants, defenders, and goalkeepers.

We’ve added all of that to the game.

Starting from Update 11, the game turns into a football world simulator.

I will tell you about the key new features now.

Each club has a youth academy. Their level is directly related to the strength of the club. From now on, no players come out of nowhere. They all come from youth academies.

Clubs compete against each other and players’ stats are saved in these matches. You can view detailed statistics for each player in each league. Players also earn experience in the amount contingent on the level of coaches in each club.

Clubs try to put their best players on the pitch. But if they are confident in their victory, they give promising young players a chance to show themselves. This is how they help their youth grow and mature.

Unfortunately, none of this comes “for free”. The world simulation requires a lot of CPU resources, which will add fairly noticeable pauses to the game when each club starts making important decisions.

However, we believe that these pauses are a fair trade-off for the level of depth and immersion that the game offers.

Live transfers are a part of realistic simulation.

Clubs can now sell and buy players. And when you sell players, they don’t disappear like they did before, but are actually transferred to a club that was interested in them.

This, by the way, may potentially result in interesting scenarios. For example, you sell a strong, but fairly old 33-year-old forward to another club and then concede two goals from this very person in the next game against them 🙂 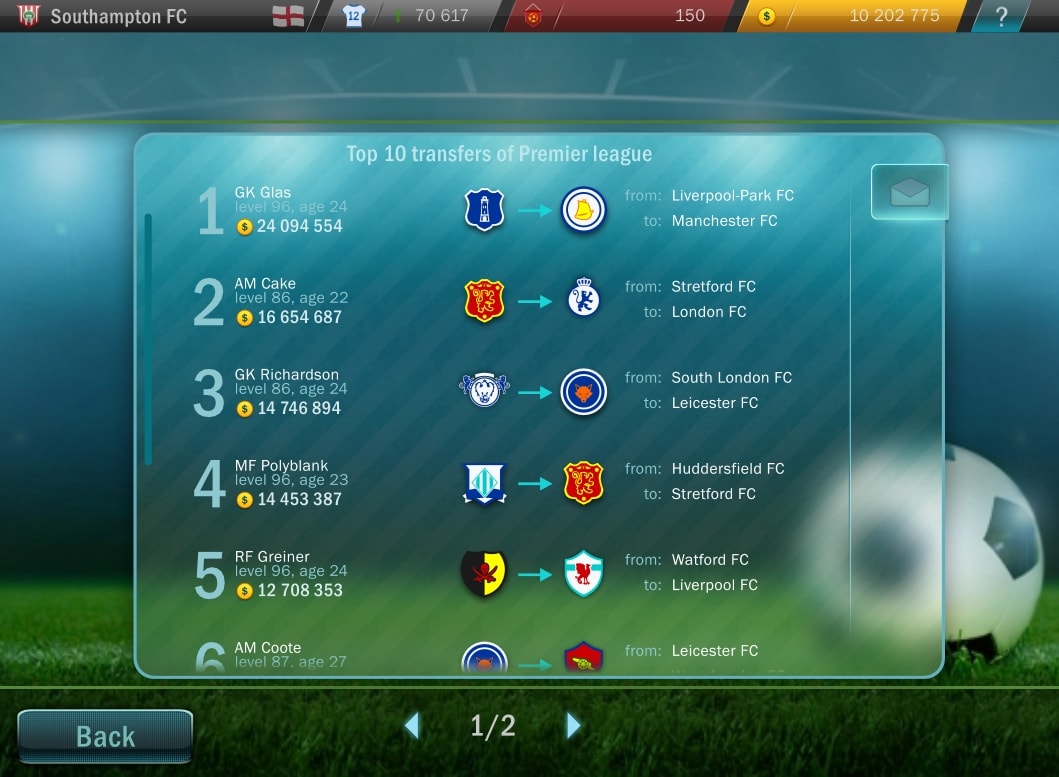 After the close of the transfer window, your assistant sends you a list of the most expensive transfers.

The game now keeps detailed statistics for each player and each game, even if a game is part of a tournament that you don’t participate in.

As the result, you can analyze the list of the best scorers, assistants, tacklers, and goalkeepers for each tournament. For example, you can play in the Amateur League and keep an eye on the best scorers in the European Cup in between matches. 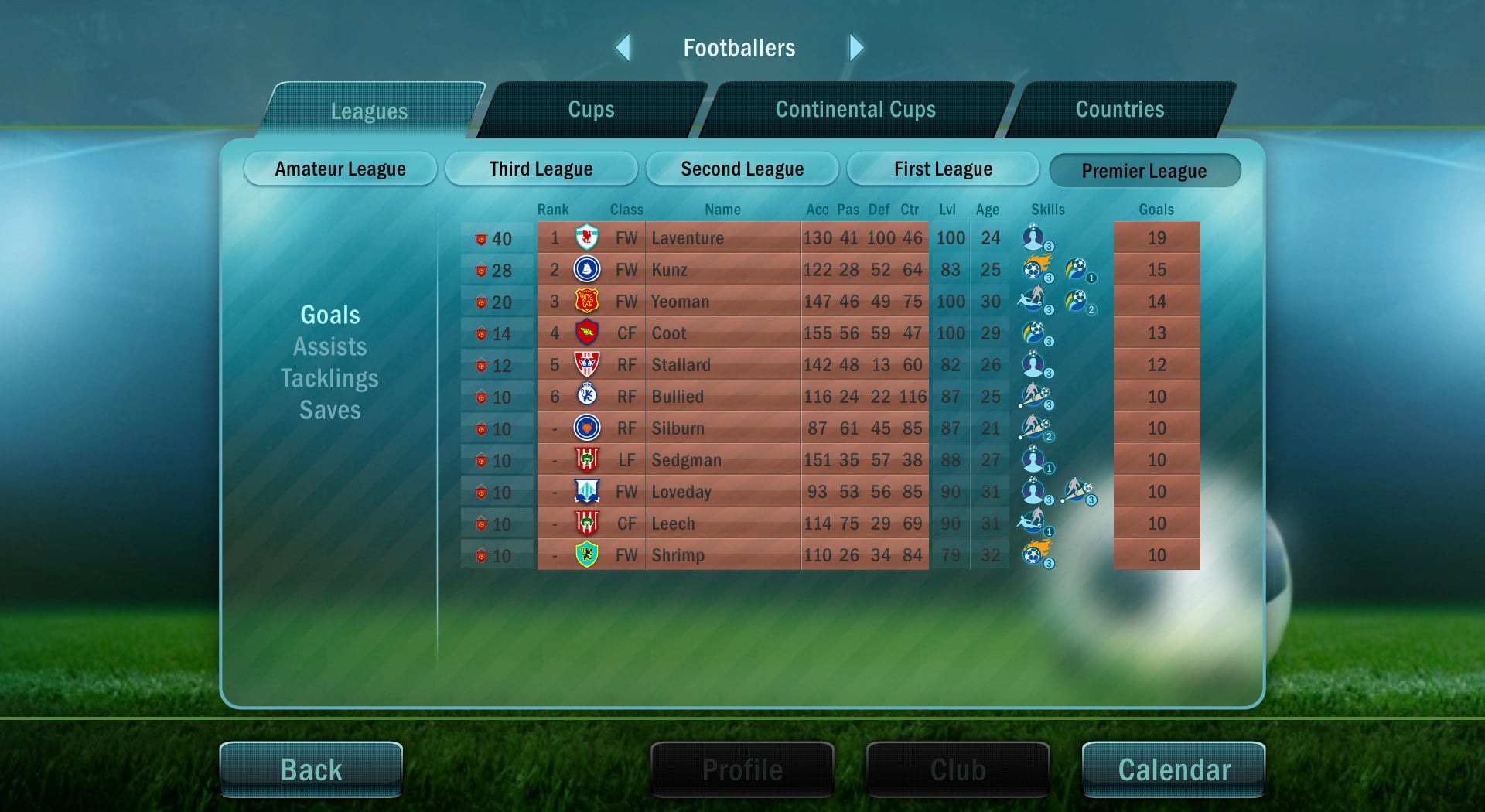 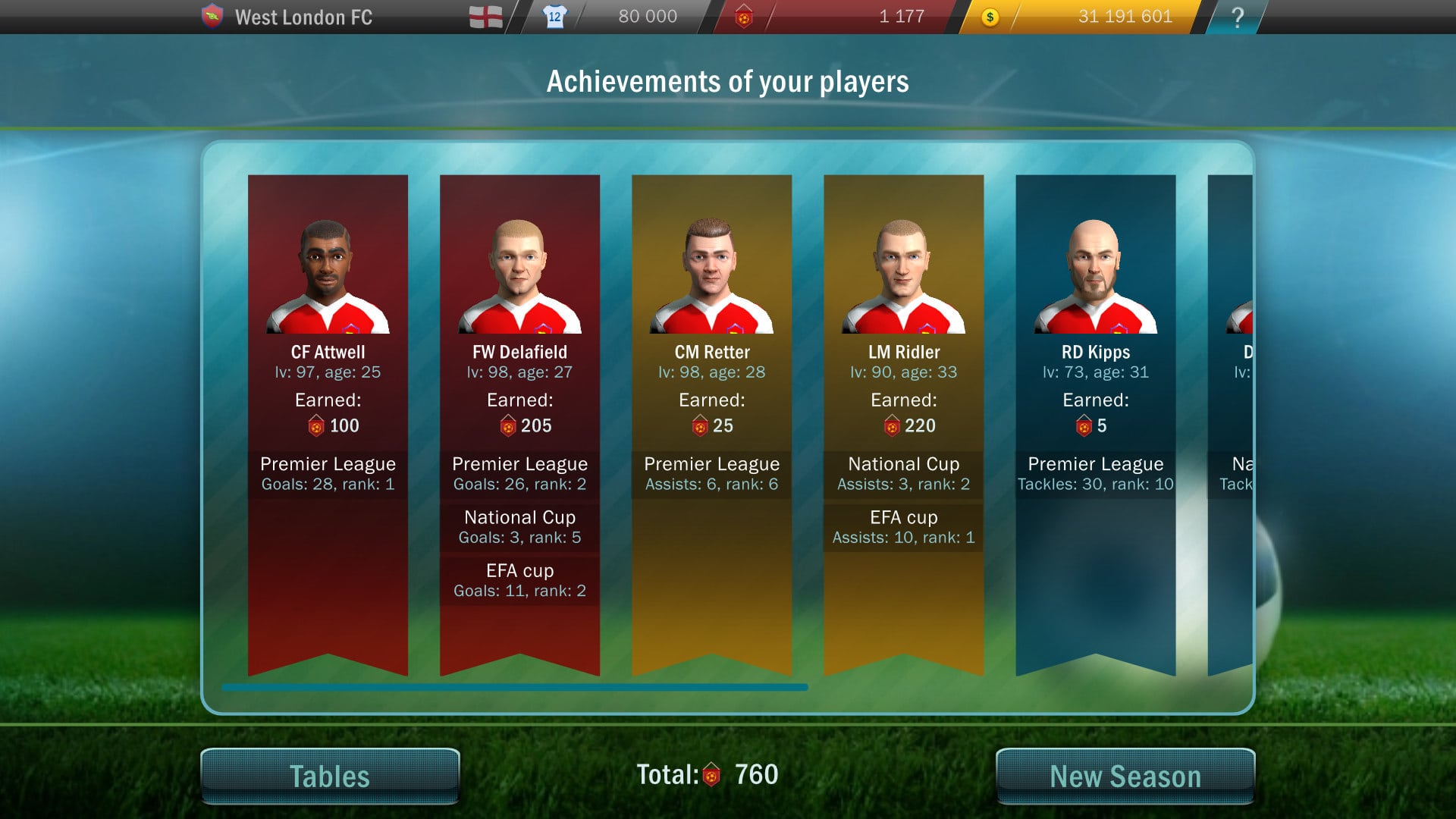 In addition, you will get Glory for each of your players making it to the best scorers list at the end of the season.

The true beauty of a living world reveals itself when you realize that the game keeps detailed historical data for each season.

After playing 5-10 seasons, you will be able to open your club’s history screen and see a graph of your ups and downs. The graph features several display modes that can indicate the trophies you won and the dynamics of your team’s strength.

For example, here is the history of my club in the hard mode: 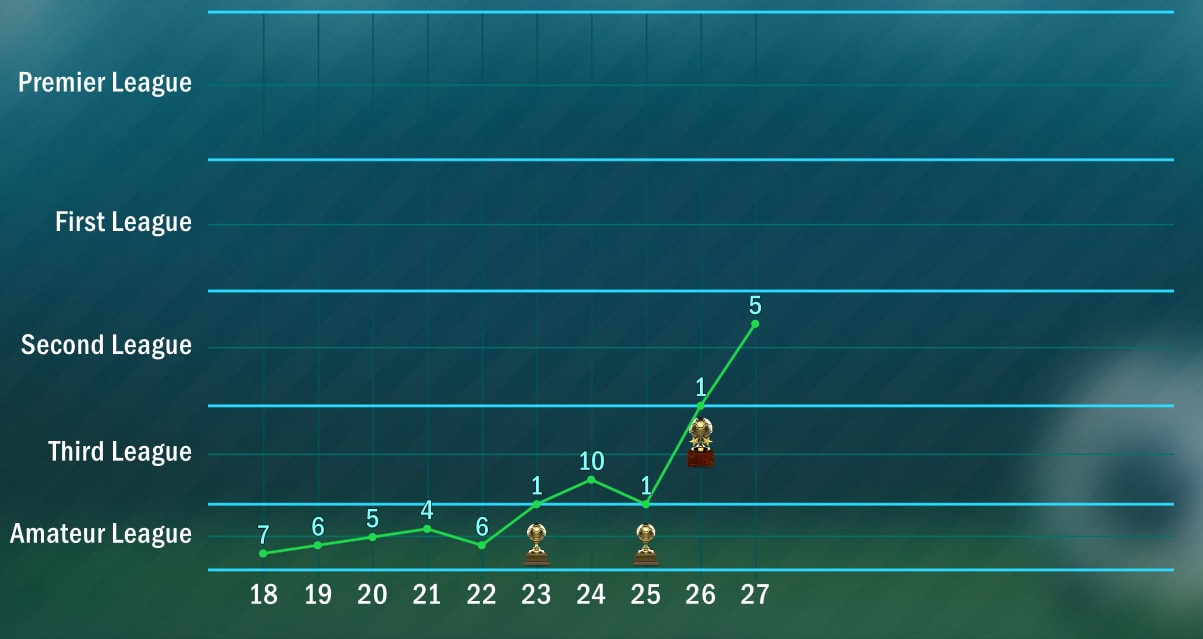 I spent several years in the Amateur league. In 2023, I got promoted, but ended up being at the very bottom of the table the very next season, so I came back. Next season, however, my club developed so well that I quickly reached the top position first in the Amateur, then in the Third League. 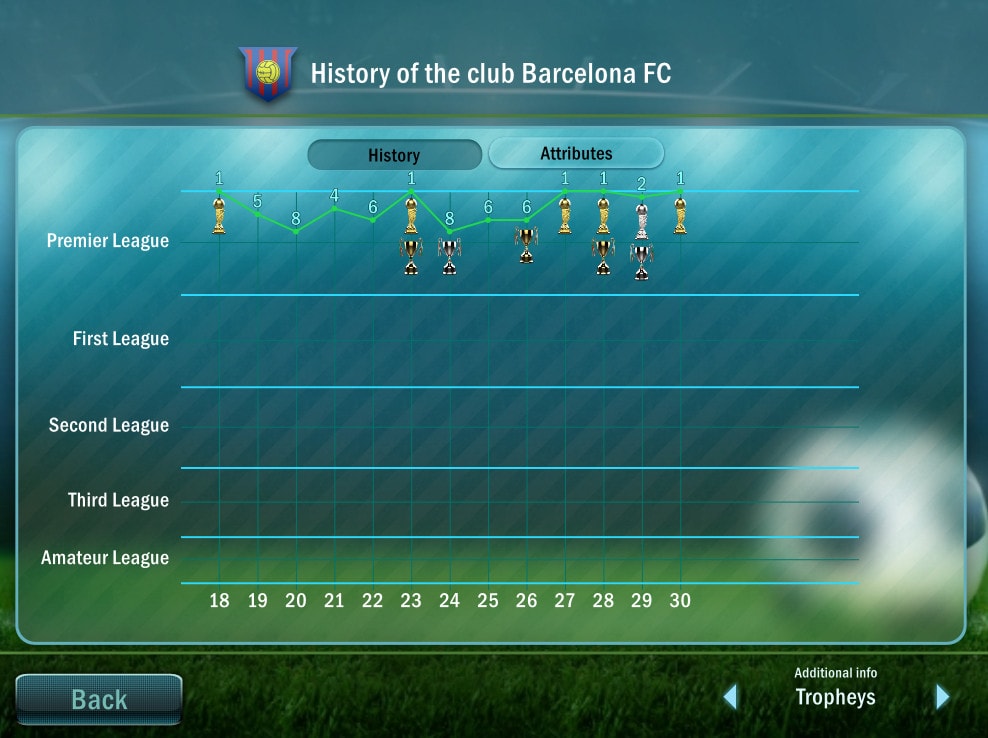 You can view these graphs for any club in the game.

With live transfers, it’s become more tempting to watch football players’ lives. What clubs did the best forward of the season play in? How many goals did he score last season? What club did he start in? How is the guy you sold to your rival doing these days? 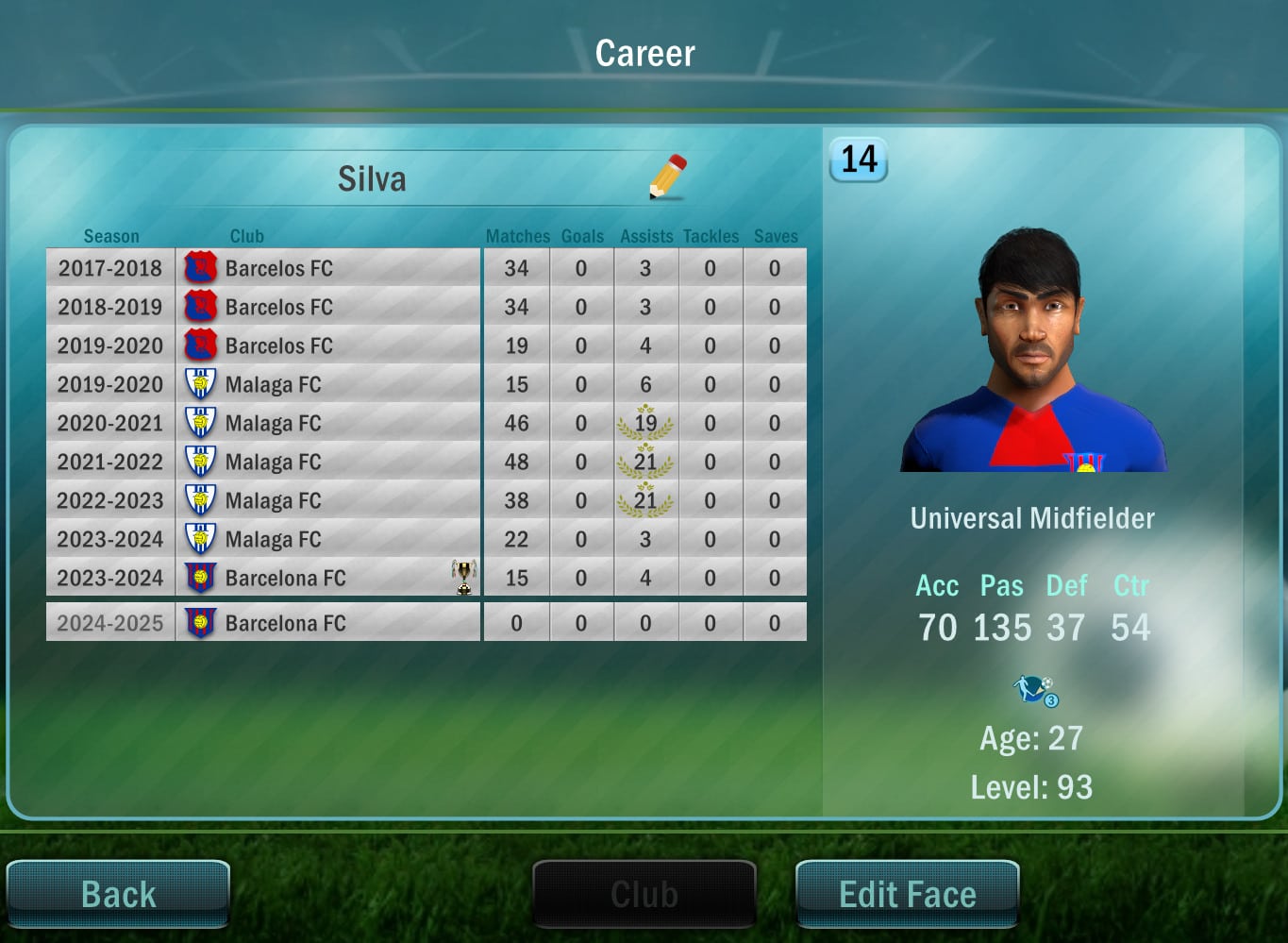 What does the screenshot show?

Also, this screen allows you to select a club and instantly view its history. It will help you to better understand what was going on with the team when that player was in it.

Starting from day one, we wanted to demonstrate that not everything depends on players. Sometimes (or even often?) you may be out of luck. Or, on the opposite, an unexpected goal in a match against a stronger opponent may help your team become victorious.

Our main random number generator produced random numbers both for your team and your opponents. However, many players don’t even notice when they are in luck, but remember their failures forever.

In order to spare your nerve cells, mice and keyboards, we decided to use a more forgiving generator. We called it “Expected”, since it produces values that are viewed by players as “fair”, but that are in fact somewhat favorable for the players.

This generator can be selected at the beginning of a new campaign. As the result, when you roll the dice, the Expected generator comes into play. When the AI rolls the dice, the Default (fair) generator works.

We want you to get to know your team. With time, you will start recognizing your players and getting used to them. One of them has grown out of your youth academy. Another one was purchased cheaply, but became the best assistant of the league. The third one was old, but proved himself to be a talented interceptor.

We have added two new features in this update that allow you to see your players in greater detail and save your team’s history.

First of all, we have changed joy and disappointment animations after goals. We used to have just a few animations, so many players expressed their emotions identically.

Now, each player will react uniquely.

Secondly, when a goal is scored, we zoom in and show our celebrating players up close. In addition, we made emotion animations, so you will not see jumping dummies, but football players that are genuinely glad.

Finally, we added a possibility to view and save a photo of your own or any other club in the game world. You can save a new photo every season, and then compare them, recall how the team changed over time, how players came and went, and how you became stronger. 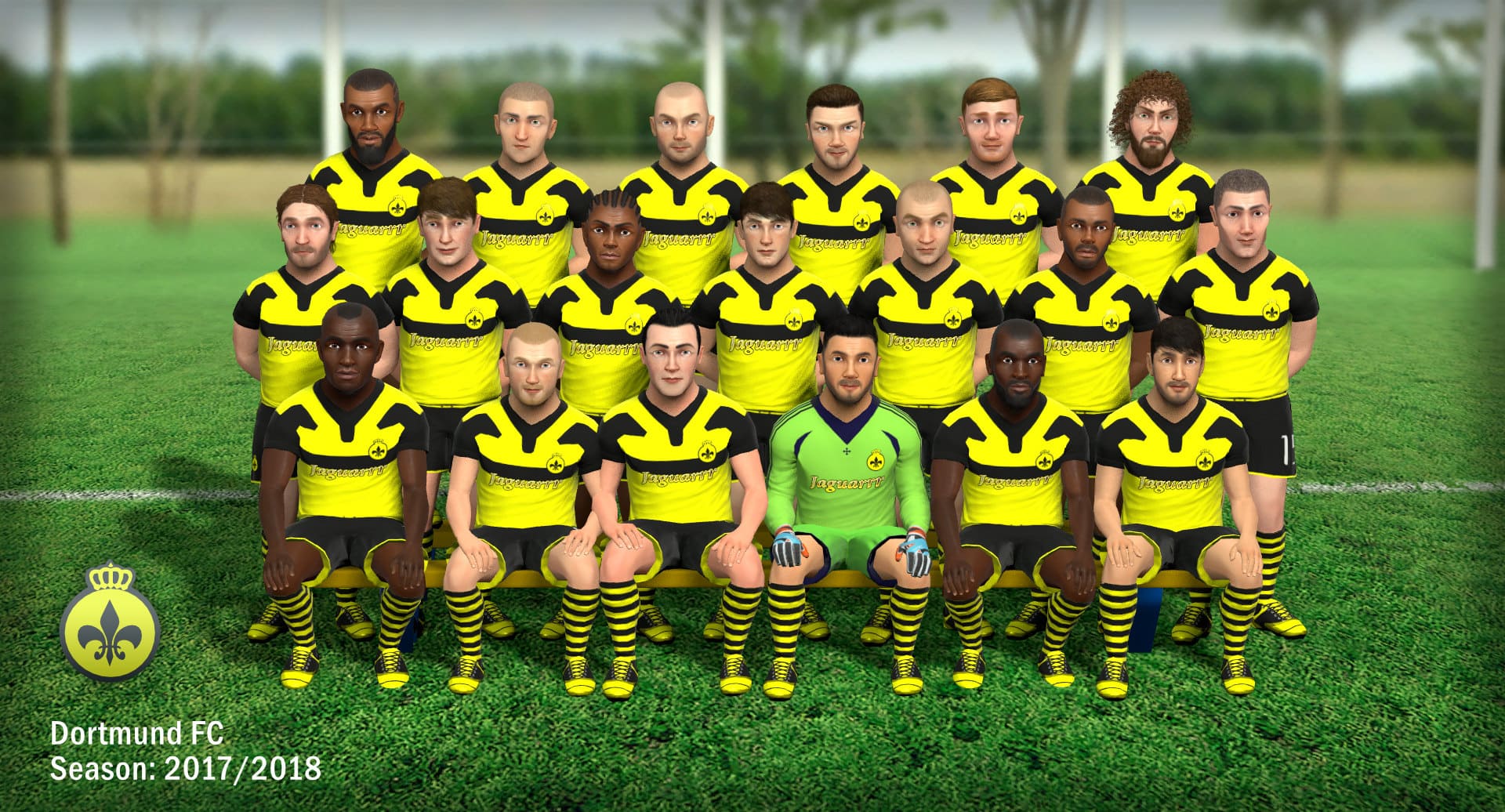 I will briefly describe other notable changes below.

After the final whistle, you will see information about the key events of the match: 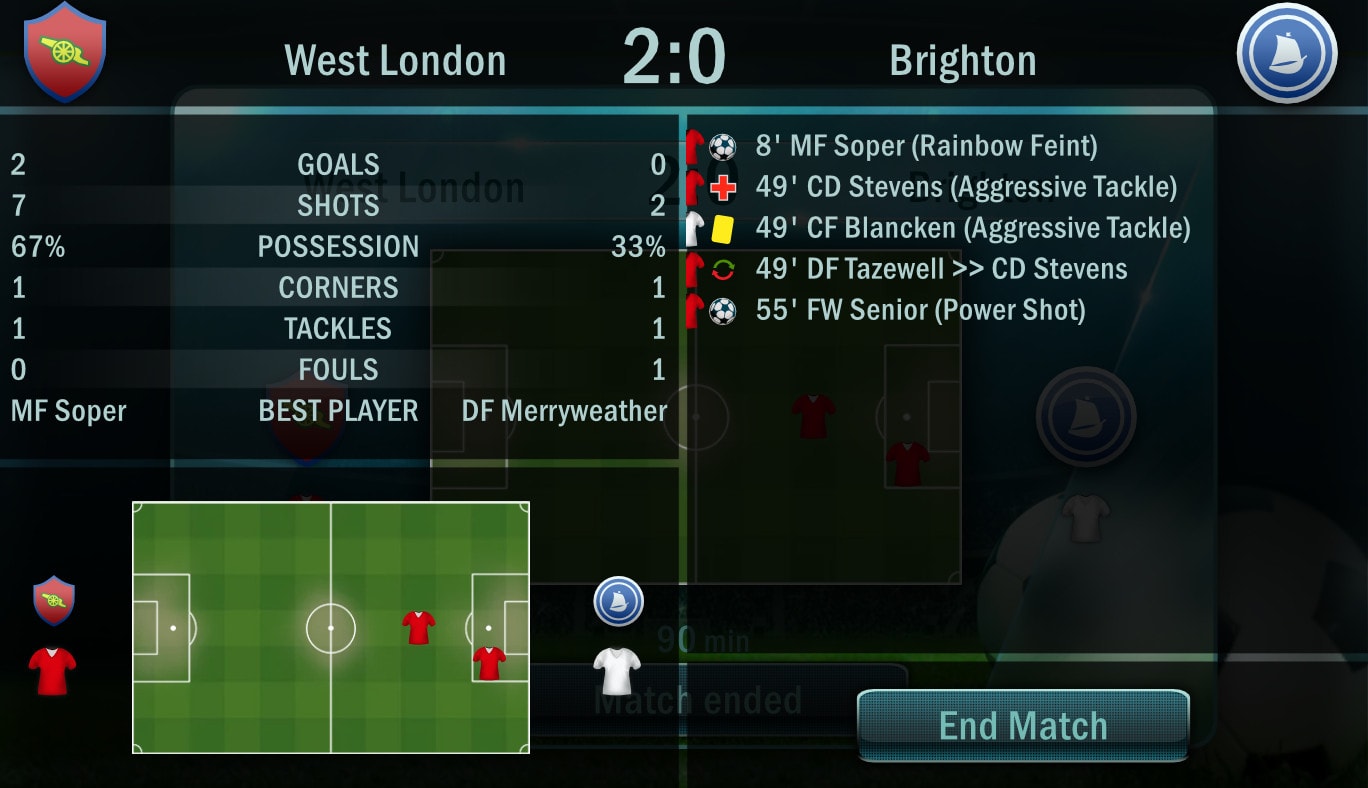 More information about actions and effects on players

There is now an icon with a question mark next to each action. Point at it to learn more information about the action.

Press and hold the Ctrl key and point the cursor at a player to see all currently active effects.

We have taken a close look at all our animations and remade the ones that were not good enough. We also improved the animation speed system and fixed the player turning system to prevent them from turning simultaneously and running backwards. The ball now spins during passes.

By the way, we added a possibility to perform a very rare scissors kick. To do that, you need a motivated player to finish a cross from a flank.

We enhanced the renderer and added more realistic lighting. Hair rendering has also been improved.

We used a transition through a green screen between different match events. It was ugly and boring. In this update, transitions are a lot more modern-looking. Moreover, they will be different for different tournaments. 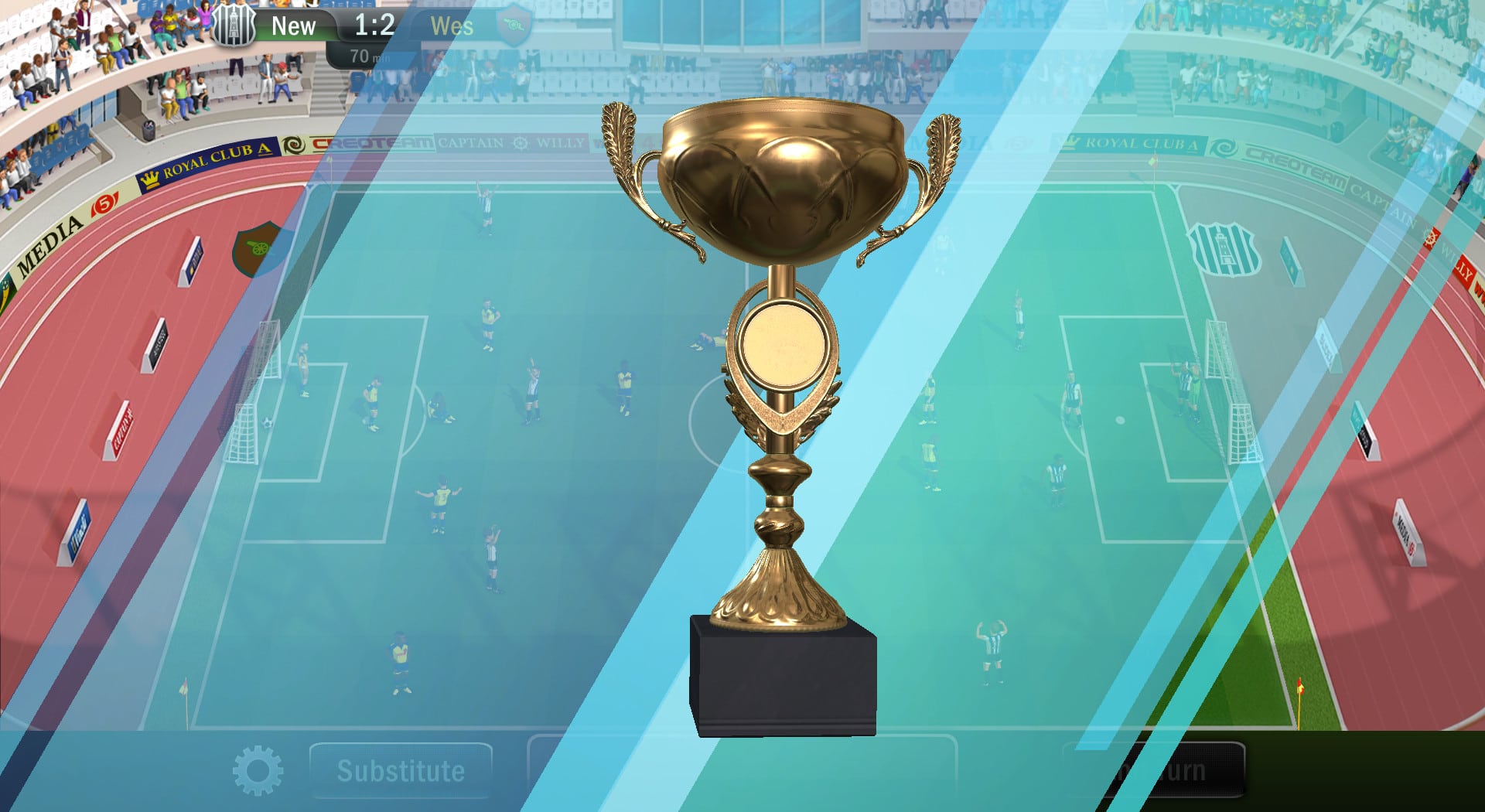 On tactical screens, you will now be able to see what players take the kick-off for their team. It will help you plan your tactics better. 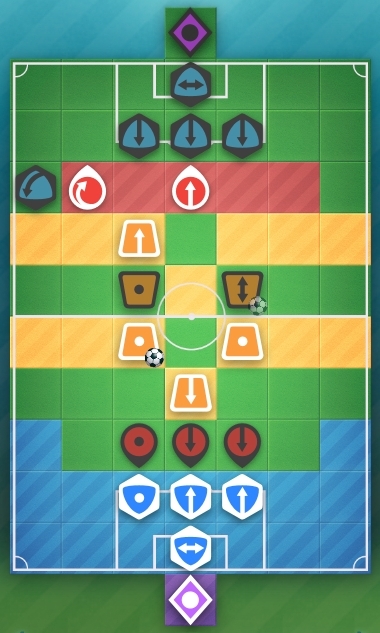 When switching to Update 11, you can continue your campaigns. You can play as you did before, but with new capabilities, while the clubs will get new “brains”. However, since we have also substantially rewritten the logic of the game world, we cannot promise that your campaigns will still have the right club development balance.

First and foremost, our team is grateful to everyone who has played the beta-version, posted reviews, and sent us bug and crash reports. You helped us a great deal!

I would also like to remind you that our game has been in Early Access for almost 3 years. Over this time, players may have spent dozens of hours playing Football, Tactics & Glory. We have gradually improved the playability of depth of the game to an extent where it can be played for hundreds of hours.

I am sure that with our new features for analyzing any club and player, many more people will enjoy spending up to thousand hours in the game.

This is why we decided to announce that the game would be leaving Early Access soon.

The release is planned for June 1st – exactly three years after the Early Access release. All we need to do before the release is to redesign the interface and make it more serious. This is a huge piece of work, but we plan to accomplish it by the release date.

In the meantime, you have the latest version of the game. We hope you will enjoy it just as much as we enjoyed beta-testing it.

Good luck on the football field!